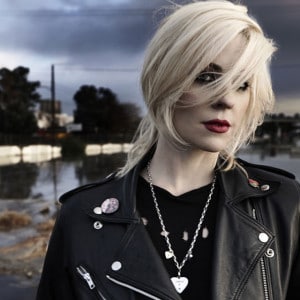 It is a truth universally acknowledged that Brody Dalle is, and will forever more, be fucking cool. She sweats attitude on stage, hiding behind her bleached mop and lipstick, low slung guitar over leopard print strides. Tonight she rarely acknowledges her audience, in fact her interactions are so arms-length they verge on disdainful, which just amplifies the feedback-loop of give-a-fuck attitude the one-time Distillers frontwoman has always had.

Tonight’s audience, a healthy mix of younger grrrls and old-school punks, is also tangibly excited. Dalle rarely graces these shores, and it’s been five years since her last serious musical project, the less-punk-more-anthemic Spinnerette. On top of that her new record, Diploid Love, the first released under her own name, is already getting buzz, a pumping mix of electronic pop, middle-finger-aloft rock and four-to-the-floor stomp. Given the crackling anticipation and the patented Brody Dalle aura-of-awesomeness, it’s something of a shame that tonight’s show never quite fulfills its potential, stalling at “good” rather than “great”.

Partly it’s because her fanbase is still rooted in the out-and-out punk of the Distillers, something clearly evidenced by the polite attention shown to newie opener Rat Race and current single Don’t Mess With Me, despite the latter being one of the best things Dalle has ever put her name on. In contrast the first dip into the Distillers’ catalogue, three songs in, with I Am A Revenant sees the place go ape shit. The injection of punk rock spit certainly lights the fuse, which crackles happily for the rest of the set, but the intended explosion never really comes. The audiences settles for the new stuff and shuffles to the sexy stomp of Spinnerette’s Ghetto Love, but it takes oldies like Coral Fang and Sing Sing Death House, or a well-judged cover of the Misfits Hybrid Moments (“I fucking wish I’d written this,” drawls Dalle) to kick the moshpit into gear.

Partly the problem comes from Dalle’s decision to play down the poppier, and more electronic aspects of her new album. Here the songs are rendered, as with Spinnerette and the Distillers before them, as a four piece punk band – two guitars, bass and drums. It means the new material loses some its fizz. If tonight’s audience is an accurate sample of Dalle’s crowd in general then this might seem a savvy decision, but in reality it means the new songs are submerged beneath the old, which work far better in this format. Some attempt at representing the more technical sounds is made via bassist Cosmo Sylvan’s effects pedals, but it feels token – mostly they just make his shrill bass-sound drill into your head like the buzz of irate wasp, and not in a good way.

Lastly the problem is, weirdly, with Dalle herself. Effortlessly cool she may be, but once or twice this seems to dip into lethargic, especially as the set goes on. Despite the presence of long-time collaborator and Distillers guitarist Tony Bevilacqua, this is, for the first time, completely Dalle’s show and she doesn’t seem hugely comfortable with that; there’re very slight shades of reticence behind the sneer. It’s only the faintest of impressions, but it’s something we’re not used to from one of the more willfully iconic personas in the last decade of rock.

By no means a bad show then; the material, new and old, is too good for that, the audience too up for it, and Dalle herself still too imposing to properly disappoint, but there is a sense of potential unfulfilled, that the show – which had no encore – rather fizzled out when it should have blown up. This is just the beginning of the promo trail for punk’s self-styled Queen of Hearts though- there’s still every chance she can get the balance right.