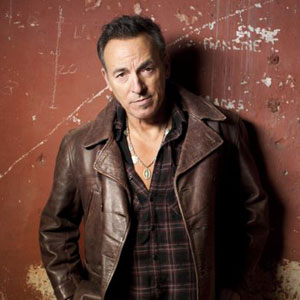 Three and a half hours. Thirty songs. 60,000 people. A 17-strong band. Andat the centre of it all, a 62 year old from New Jersey, oozing energy andcharisma and showing all and sundry why he’s one of the greatest liveperformers of the modern age.

Bruce Springsteen concerts passed into legend long ago, right from whenJon Landau made his famous prediction that “I saw rock and roll’s futureand its name is Bruce Springsteen”. There are many reasons to doubt thewords of a Springsteen disciple – the misplaced view of the ‘cars & girls’mythology, the almost insane running times, the sheer devotion of themasses that comes perilously close to slipping into corny cliché – yetonce you see The E-Street Band in full flow, it’s impossible not to becomea full-on believer.

It’s hard to believe that there were even doubts about the Wrecking Balltour. The death of iconic saxophonist Clarence Clemons last year led someto wonder whether the E-Street Band would ever be the same again -Springsteen’s moved to fill the massive hole left by Clemons’ death with a5 strong brass section, including The Big Man’s nephew Jake on saxophone(who was greeted with full-throated cheers for almost every sax break).

It’s the perfect time for Springsteen to reappear. His latest albumWrecking Ball marks a startling return to form after years of treadingwater – songs exploring the recession, and general economic malaise, theseething anger of Jack Of All Trades, Death To My Hometown and We TakeCare Of Our Own make Springsteen sound more relevant and vital thanartists half his age. To see him connect with his audience, passionatelysinging “hard times come, and hard times go” is to witness something veryspecial. The main fault of stadium gigs is the lack of intimacy:Springsteen is one of the few artists who make you feel, in a crowd of60,000, that he’s singing to you alone.

That new material fits in seamlessly tonight, with the pivotal,banker-baiting, line of “If I had me a gun / I’d find the bastards andshoot them on sight” receiving a spontaneous round of applause from theManchester crowd, and the raucous Shackled And Drawn and Land Of Hope AndDreams already sounding like old friends. The crowd lapped it all up, the trademark cry of ‘BROOOOOOOOCE’ rumbling after each song (the louder andlonger the ‘Broooce’, the more the crowd approves, appears to be thegeneral rule).

There was no po-faced moralising from The Boss though – in fact, from thevery first, exhilarating note of Badlands right through to the encore ofTwist And Shout, this was a massive 210 minute party. Springsteen makesfor the perfect host, jumping up on his piano, forever diving into thefront row to shake hands with his adoring public, and pulling variousaudience members up onstage, including a girl wearing a ‘onesie’ forDancing In The Dark, and a very lucky young boy during Waiting For A SunnyDay who counted the band back in with a gloriously excited cry of “GoE-Street Band!”.

The setlist took in most of the classics – a goosebumps-inducing AtlanticCity, the fabled ’78 version of Prove It All Night, a euphoric one-twosucker punch of Thunder Road and Born To Run, and a poignant My City OfRuins, with Springsteen’s cries of “Are you missing anyone?” being lentnew poignancy by Clarence Clemons’ absence. There were even treats for thehardcore fan, such as a rarely performed solo version of The Promise.

It was an evening to laugh (a brilliant James Brown-esque piece ofshowmanship with Steve Van Zandt ‘reviving’ a mock-asleep Bruce with asponge), and cry (an almost unbearably moving tribute to Clemons duringTenth Avenue Freeze-Out where, on the line “and the Big Man joined theband”, the band fell silent while video footage of Clarence played on thescreen) – but mostly to cast aside any cynicism and revel in the presenceof one of the true legends of modern rock music.

Bruce Springsteen played: Badlands, No Surrender, We Take Care Of Our Own, Wrecking Ball, Death To My Hometown, My City Of Ruins, Spirit in the Night, The E Street Shuffle, Jack of All Trades, Atlantic City, Prove It All Night (78 Intro), Two Hearts, You Can Look (But You Better Not Touch), Darlington County, Shackled and Drawn, Waitin’ on a Sunny Day, Save My Love, The Promise (solo piano version), The River, The Rising, Out in the Street, Land of Hope and DreamsEncore: We Are Alive, Thunder Road, Born to Run, Bobby Jean, Cadillac Ranch, Dancing in the Dark, Tenth Avenue Freeze-Out, Twist and Shout