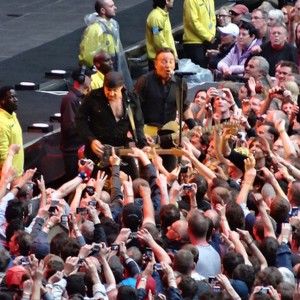 Bruce Springsteen, as is so often the case, appears to have a job to do. In spite of the usually epic duration of his live shows (on which point this first visit to the new Wembley more than delivers), he’s not wasting any time. Dressed, as always, all in black, the E Street Band launch straight into Land Of Hope And Dreams, a longstanding live favourite reimagined for the Wrecking Ball album, and a song more familiar from the home stretch of their sets. It sounds terrific, full blooded, rousing and relentlessly intense. It’s not exactly subtle, but then subtlety is hardly what people queue for days in advance of Springsteen shows expecting. They want their moods elevated, their spirits raised and their lives transformed.

Springsteen’s great skill as an artist is that he is able to do this whilst also challenging his audience. Tonight, he’s on particularly daring form, particularly given the sheer size of the Wembley audience. The first portion of the set is liberally sprinkled with rarities, including Jackson Cage, which still sounds like a palpable howl on behalf of the downtrodden. He then runs to the lower stage, taking sign requests from the pit much earlier than is usual. There are some inspired choices – including a lovely Save My Love (an outtake from Darkness On The Edge Of Town later released on The Promise), an intensified Lost In The Flood and a compelling reading of This Hard Land. There’s also a fantastically uplifting Rosalita (during which Springsteen, guitarist Steve Van Zandt and saxophonist Jake Clemons gather together on the small podium stage within the crowd in the first of many moments of camaraderie).

The Wrecking Ball Tour has become one of Springsteen’s longest and most hyped tours of his career, and it returns to the UK in a very different form from last year’s shows. There are only a handful of songs from Wrecking Ball itself. Mostly gone are the moving elegies to missing band members Danny Federici and Clarence Clemons. Also mercilessly dispensed with is much of Springsteen’s legendary testifying to the audience. This is one of the most no nonsense shows he has given in some time.

This is because of the tour’s new purpose – a celebration of the core of the band’s catalogue and performances, with one of the classic albums aired in full. Tonight, London is lucky enough to get Darkness On The Edge Of Town, perhaps Springsteen’s greatest long form achievement, an album on which he drew deep from the well of human experience and sadness. It’s not exactly the obvious choice for a stadium show – many had expected a revisiting of Born In The USA, the album most closely associated with the old Wembley, but Springsteen’s return to his back catalogue is never about mere nostalgia. It is more a celebration of the timelessness and undiminished authority of these songs – and these songs of darkness and defiance are among his very best.

Tonight, the band perform these songs with a sense of dignity and responsibility. Badlands remains an audience participation favourite, in spite of its rather different context in this show, but Adam Raised A Cain raises the intensity levels to fever point, with Bruce taking an explosive guitar solo and singing in impressively gutsy style. Something In The Night is beautiful and greatly enhanced by the presence of the E Street Horns (otherwise under-used during this section of the show) whilst Candy’s Room retains all of its lusty drive. A moment of genuine poignance comes with Racing In The Streets, its glorious extended coda (on which Roy Bittan stretches out brilliantly on piano) perfectly encapsulating the E Street sound and ushering in a beautiful sunset (the weather mostly holds out after the shower of Biblical proportions that drenched the queue).

The second half of the show offers the chance for fans to hear more live rarities. Factory is melancholy and controlled, whilst Streets Of Fire has an urgency and power. Then there is the inevitable double whammy of two of his best songs – a typically storming Prove It All Night (sadly played without the ’78 intro), on which Nils Lofgren is allowed his one moment of show-stopping virtuosity, an excoriating solo complete with teeth and 360 degree spins. The album’s brilliant title track concludes things with convincing soul and fire.

This being a Springsteen show, there is of course much more still to come. The home stretch sees Bruce cut loose and work the crowd a little more. For the most part, this is standard set list, but anyone unfamiliar with the E Street experience would no doubt have taken a lot of joy from Bruce’s energy and conviction. There’s a mass singalong during the intro to Shackled And Drawn (which also features a strong vocal from Cindy Mizelle), and the young boy picked from the audience to sing Waitin’ On A Sunny Day does such a creditable job that he earns a ride on Bruce’s shoulders – no doubt a very special and unforgettable moment for him. It all finishes with a vigorous run through Light Of Day, a song Springsteen wrote for Joan Jett and which features yet another character driving in search of escape from the burdens of life.

The encores start with Pay Me My Money Down from the Seeger Sessions project, before which Bruce promises the audience they will all be dancing “in about 30 seconds”. This demonstrates the versatility of this configuration of the E Street Band, and gives the brilliant horn section a moment of limelight. There’s the usual blast through Born To Run and a requested Bobby Jean which ensures that Born In The USA is not completely ignored. Dancing In The Dark receives its inevitable airing, made a little more special this time by Bruce’s honouring of some requests. One girl has travelled “all the way from San Siro to Wembley to dance with Steve”, and she is duly plucked from the audience to join the band on stage. An audience member’s offer of “$1 to dance with my Mum” is also gleefully accepted.

Tenth Avenue Freeze Out then thankfully reminds us of the band’s grit and soul, and offers a chance to pay tribute to Clarence Clemons, although this moment has sadly been curtailed from previous shows. This looks as if it will be the end of the show, as the band form a line to accept the richly deserved ovation, but then Bruce says “Shall we do it? The plug might be pulled…” and they launch into Twist And Shout, during which they were famously cut off during last summer’s Hyde Park gig. That’s still not it though – the band leave the stage and Bruce offers one beautiful parting gift, a solo acoustic version of Thunder Road with just guitar, voice and harmonica. It is a moment to treasure and a moving end to an epic, brilliant performance. It also yet again busts the curfew, making the show 31 songs in three hours and 10 minutes.

One young woman brandishes a sign that reads ‘Thank you to making our lives better’ (sic). This is exactly what the E Street Band do for so many people, and have been doing night after night for 28 years. Speculation on the internet is rife as to the future of the band. Springsteen has recently said in interviews that he hopes his next project will be something along similar lines to the Seeger Sessions (albeit hopefully with original material this time) and many now seriously suggest this may be the final E Street Band tour. He will be back in London in a few weeks for Hard Rock Calling and there are a few more dates in Europe. But what after that?