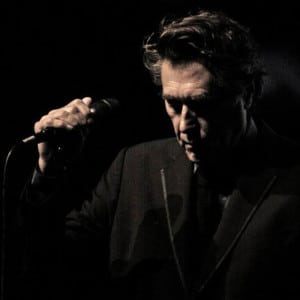 Ladies of a certain age were out in force and dressed in their finest, matching the dinner jacketed chaps of The Bryan Ferry Orchestra on stage, for this stop in the Roxy Music man’s 40th anniversary-of-sorts tour. Such attire suited the evening’s formal feel, amid the Royal Albert Hall’s opulence and the ’20s jazz age take on Ferry’s canon that was to begin the show’s two and a half hour duration. The lengthy set would underline Bryan Ferry‘s role as, primarily, an interpreter of both the music and musical styles of others.

Having contributed to Baz Luhrmann’s The Great Gatsby soundtrack and released an album of reinterpretations – with Ferry in a backseat role as co-producer – the Orchestra was in fine form for an early medley of tracks that settled the evening into an amiable, easy listening groove. Headed by the MD Colin Good – who, sat at his grand piano, doubled as a rather plummy MC – the Orchestra sported bass sax, clarinet, double bass, trumpets and much else of a jazzy nature besides. Despite this ostensibly being a Bryan Ferry concert, they found time to slot in a vocal-less take on Lana Del Rey‘s Young And Beautiful before he even took to the stage.

With Ferry joining the Orchestra ahead of Reason Or Rhyme, a track which on the Olympia album is all atmosphere and serenade, the thought occurred that we’d be in for a whole concert of these jazz age reinterpretations, as our 68-year-old host crooned away centre stage. But no; suddenly, and seemingly from nowhere, a second band appeared. These players sported such modern musical devices as a bass guitar, a lead guitar and drums and, in a swoop, the song’s jazzy feel was ripped asunder and left at the feet of a towering guitar solo. The juxtaposition of styles, taking in rock, jazz and blues, would continue for the rest of the evening, well representing Ferry’s career in the process. But never again would the element of surprise be quite as striking.

The set, split roughly in half by an interval, ranged from the curious – the traditional Irish folk song Carrickfergus – to stalwart material from his Roxy Music and early solo career, covering works by John Lennon, JJ Cale and others along the way. Referential asides were made to both Charlie Parker and Duke Ellington, timeless legends Ferry perhaps sees himself standing alongside. The well oiled players soaked up every stylistic weave with aplomb; Good’s assured musical direction in tying such disparate instrumentation and genres together while making it all appear quite effortless could not go without note.

In contrast, Ferry’s voice is often tantamount to a whisper, and he can come unstuck for a lack of projection. Tonight, the sound seemed to be set up with this in mind. But it over-amplified him in the noisier numbers, giving gruff lower notes extra decibels while curiously failing to do much about the rest, the words being too often drowned in the arrangements and swatted further by a maddeningly echoing snare drum. Only during Knocking On Heaven’s Door – one of four Bob Dylan covers making their way into the set from the Dylanesque album – and in the last five songs did Ferry unleash his voice to match his backing players, as though he’d been saving his stamina for a last gasp at the big hits.

He duly wheeled them out, finding time to tinkle a keyboard and an electric piano once apiece as if to remind of his musician status. Love Is The Drug had the audience – a sizeable tally of whom looked like they’d been to many a Ferry concert down the years – variously tottering about and nodding happily. Of course no Ferry concert would be complete without the bombastic Let’s Stick Together – another cover, of course – and the band and Orchestra, with two sparkly female backing singers doing the Jerry Hall catcalls, duly gave it plenty of oomph while Ferry enjoyed himself in the middle of it all, well pleasing the comfortably converted to whom he preaches.