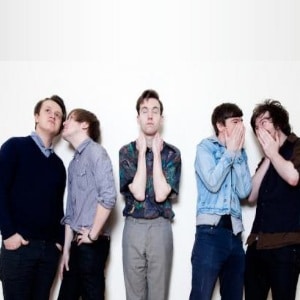 The London district of Shepherd’s Bush has a somewhat downtrodden image. That’s a bit unfair, because over the years London W12 has become a live music hub to rival any in the capital. Bushstock – now in its third year – is a one-day festival taking place across a diverse range of Shepherd’s Bush venues: St Stephen’s Church, The Defector’s Weld pub, the exquisite Edwardian venue Bush Hall, and Ginglik, a public toilet-turned-private members’ club.

It’s not without its faults (The Defector’s Weld simply doesn’t work as a music venue), but Bushstock is an efficiently-run alternative to the gigantic bun fight that is Camden Crawl.

Live music experiences don’t get much more civilised than an afternoon at St Stephen’s Church, sipping Pimm’s in the pews while catching some up-and-coming acts. Of these, George Ezra doesn’t make a great first impression, shuffling on to the stage wearing a jumper that appears to have been bought in a branch of Marks & Spencer’s circa 1985. Later, his stories about inter-railing around Europe are less interesting than he thinks they are.  None of which can dampen the impact of his voice, an extraordinary, honking thing. Today he’s accompanied solely by his own electric guitar but, with the right production, his songs sound like they could sit comfortably on to the Radio 2 playlist (no faint praise intended).

Woolly-hatted and heavily eyelined, Annie Eve resembles Avril Lavigne wrapped up warm for a spot of busking. Eve has a pretty voice, but it’s also a familiar one: it shares the same diaphanous, edge-of-tears quality of Daughter’s Elena Tonra and numerous other serious-faced singer-songwriters. Still, the songs’ slow-burning, twinkly nature complement the stained-glass surroundings nicely.

Over at The Defector’s Weld, Young War is a tall-haired singer-songwriter whose brand of acoustic R&B feels closer to Craig David than Bon Iver. He’s followed by The Lake Poets: the stage name of one Martin Longstaff, a likable young man from Sunderland who looks like he’s stepped out of a Topman catalogue. Longstaff’s enthusiasm about everything from the audience to the moderately sunny weather is refreshing and sweet. Unfortunately, his songs are almost aggressively bland and his lyrics rigidly on-the-nose: a song called City By The Sea is, unsurprisingly, about a city by the sea.

Back at St Stephen’s, Serafina Steer should clean up. The singer-harpist enjoyed widespread critical acclaim for her latest album, The Moths Are Real, while a church feels like the ideal backdrop for her contemporary chamber pop. Yet, weirdly, Steer spends much of the set behaving as if completely unfamiliar with the conventions of performing in public. She stumbles over her song introductions, gets completely thrown by an audience member innocently shouting out a song request and is visibly nervous throughout. It’s a shame because, when it gets going, her music is unmistakably English and quite lovely.

Marika Hackman’s set highlights the shortcomings of The Defector’s Weld as a venue. Unless positioned in the first few rows of the audience, the Brighton-based singer-songwriter is almost completely drowned out by the chatter of punters at the bar. When audible, Hackman’s music sounds perfectly pleasant but, really, it’s impossible to assess her performance in these conditions.

The closing trio of sets at Ginglik provide some relief from the predominately acoustic textures of the bulk of the Bushstock bill. Duologue are a London five-piece who make hyperactive indie-pop redolent of Foals. Their off-key harmonies are, frankly, a bit of a racket to these ears, but this doesn’t stop their set being received enthusiastically by the sizeable crowd.

Up next are Post War Years, a Leamington Spa-by-way-of-Hackney four-piece. They give an energetic performance in which even the pressing of a button on a computer is delivered with gusto, but their hooks don’t stick and singer Henry Riggs’ habit of referring to the audience as “dudes” makes him sound like an aging gap year student.

It’s left to venue headliners Dutch Uncles to salvage the day. They’re over half an hour late – a degree of tardiness that would be irritating in normal circumstances, and borderline unendurable in the intense heat of a crammed basement venue. The fact that they’re not especially apologetic when they eventually start (“I hope you enjoyed our sound-check!”) doesn’t help matters.

But all this is soon forgotten when The ‘Uncles launch into their set. Their latest album, Out Of Touch In The Wild, is one of the year’s best: a heaven-sent amalgam of Field Music, Wild Beasts and Steve Reich. Duncan Wallis is a mesmeric front man: looking like a cross between David Tennant and Ben Miller and sounding like Hot Chip’s Alexis Taylor, his jerky dance moves take on a hyper-real quality under the venue’s strobe lighting. Live, it’s fascinating to watch Dutch Uncles’ complex songs brought to life in a flurry of battered xylophones and metronomic piano lines. This is music that’s equal parts cerebral and physical, and the highlight of a patchily enjoyable day of live music.