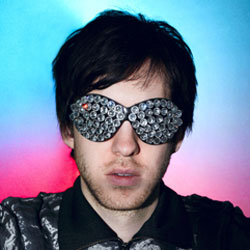 Calvin Harris’s forthcoming second album is called Ready For The Weekend, yet here we were hearing tracks from it on a Monday night. Still, as the man himself said, repeatedly, it was going to go off. It did.

Following soupy-sounding support from Mr Hudson, Harris had a good deal of warming up to do for the last of the Somerset House Summer Series of gigs. But with the first bassy notes of his set the sound was switched to “STADIUM RAVE” and he never really looked back, despite copious reminders that it was, indeed, a Monday.

The big trancey synth stabs of recent chart-topping single I’m Not Alone are a far cry from when we first saw Harris, in the Cuban Bar at the Camden Crawl in 2007. Back then he was hawking some oh-so-knowing ’80s sounds in search of a purpose even if, like VIKI’s in I, Robot, their logic was undeniable.

Since then he’s produced a few tracks for Kylie and turned down doing the same for Lady GaGa, so it’s no wonder his sometime toytown sound has given way to more polished production and a more sustained songwriting touch. But I’m Not Alone’s anthemic change of direction aside, Harris is the victim of some curious scheduling that has ensured that this gig and his Roundhouse iTunes show of a couple of nights previously went out to an audience yet to get their hands on (most of) the new material.

Fortunately for Harris, who somehow needed two stands of synths and gizmos to help him twirl about like a cast member from Grease, this mattered little. It mattered less still to those in the audience born In The ’80s, for whom he always has something Acceptable. He’d later remind us that he likes The Girls of every shape and shade with that other monster hit from his debut album I Created Disco. Both of these songs remain as irritating as they were first time round, but with his full band including drums, bass, guitar and extra synths, he’s reworked them to fit into his new arena-filling ambitions.

What’s changed most since his debut is that he now backs up his maddening chutzpah. The frantic good time anthem that is the new album’s title track, with its commercial piano lead and high end diva vocals, completes his transformation from bedroom electrogeek to electro rockstar. And maybe more than just him will believe it.

Anyone expecting Dizzee Rascal to swagger on stage for their chart-slaying collaboration Dance Wiv Me faced disappointment, but while Harris provided much of what made that song work, and while it features on his new album, it’s not part of tonight’s set.

With a strict curfew in place there was no time for an encore either. The weekend is mere days away, but on tonight’s evidence this gangly Dumfriesan is, even on a Monday, ready for it.