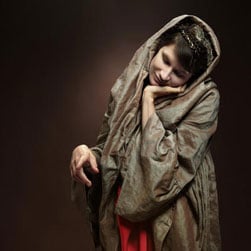 Camille recently became a mother, and the experience seems to have informed her vocals and whole outlook on new album Ilo Veyou. A superlative singer, the French diva has pursued a singularly outré path, which might account for her lack of mainstream success on this side of La Mer despite her prodigious talent. It’s a path that has led her, for instance, to take on made-up characters and sing in their voices. Motherhood has provided her with another – a baby. So now she can sing like a small child, and she’s not afraid to. So she does. Mainstream, be damned.

Nor is she bothered about translating her rapid-fire French between-songs musings into English, no matter how many rosbifs gaze adoringly at her this evening – though the francophone diaspora is out in force too. From the opening breathiness of the a cappella Aujourd’hui through the French charm of Allez Allez Allez and the lolloping L’Etourderie, her every statement, note and movement spell out an intent that will compromise for no-one. Nor should she – she’s developing a sizeable cult following that, tonight, packed out the venerable old music hall that is the Hackney Empire. They came to see an artist who doesn’t mind subverting her serious side with humour either, for Camille is as much an all-round entertainer as a singer-songwriter.

As such, the theatrical venue suited her show to a tee. A single bulb on a rope dangled down to the centre of the cavernous stage, and she used this to variously highlight her face, appear lost in a big world and create visuals to suit her songs. To begin with she wrapped herself and her flowing robe around the bulb, creating a human lantern. Later she would set it swinging back and forth across the stage, creating moving shadows on a sheet of gauze draped across the back of the stage as visual accompaniment. Simplicity in hand with genius, these moments hammer home why Camille live has to be seen.

Later she would channel Edith Piaf on La France, singing something improbable about photocopiers, causing uproarious laughter with her vocal inflections, comedy pauses, ambiguous English and gentle rib-tickling of the patriotic Piafian legend. By the song’s end she had asked for two dancers to step along to the song’s 3/4 beat – and her appeal was met by two men. Cue tittering in the aisles.

Her creativity – and that of her versatile band, who variously tackle piano/guitar, double bass/percussion and violin – is quite unafraid of failure. Towards the end of the evening, following on from a section she bills as her ‘greatest hits’ with tongue firmly in cheek, she becomes a teacher and points to letters of the alphabet, projected onto the gauze. These she sings the sounds of, encouraging the audience to join her. Lasting several minutes beyond a joke and quite undoing the spellbinding atmosphere laid down before, it’s almost as though she worries at being taken too seriously, at being revered for being any good. The feeling is reinforced by the inclusion of Cats & Dogs in the set – the audience is divided up into canines and felines and meaows and woofs take over.

A lesser artist would acknowledge plaudits for their voice – and what a voice – their performance and perhaps their songs. Songs like the sublimely beautiful Wet Boy, which she performs lying down, or the equally dreamy Le Berger, towards the end of which she turns her voice into something like a Chinese panpipe. Camille left such notions behind when she decided to enjoy herself and throw everything she had at creating something unique, however absurd. As audience-requested Au Port and intimate new song Piscine – “it’s about a swimming pool that wants to be in the sea” – bring the evening to a close, and production credits are projected onto the gauze, the show’s star revels as the one-off she is. One show is simply not enough.