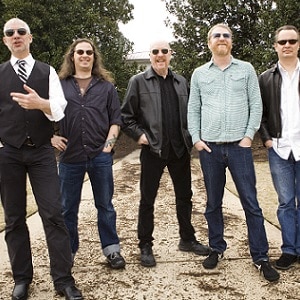 Camper Van Beethoven seem pleased to be in Manchester, although there has been a mishap on the way here. “It’s nice to be back in Manchester,” says the band’s front man David Lowery. “We haven’t done a soundcheck. I suppose this happens to you all the time but we were four hours late because of the traffic.”

It’s Camper Van Beethoven’s first visit to the city in nine years and only their second in the last 25 years. For a band that has such cult status, this is somewhat surprising – so too is the fact that the music hall is far from capacity. Looking at the audience and the number of band t-shirts being worn, it seems the hardcore fans form the vast majority.

Still, Lowery seems taken by the Deaf Institute and its former life as a centre for Manchester’s hearing impaired, although whether he’s had the full accurate history is another matter; at one point he asks: “Is it true this used to be an operating theatre at one time?” before adding that the band will be performing medical operations on the music hall’s gallery later.

When Lowery and the rest begin their set with Northern California Girls, from their new album La Costa Perdida, you wouldn’t have thought they missed the soundcheck – they’re tight and accomplished sounding, Jonathan Segel’s violin playing especially, while the rest help create a relaxed, almost placid, West Coast feel. Too High For The Love-In, also from their new album, livens things up a bit, particularly with Lowery’s cries of “Flying ambulance, flying ambulance, flying ambulance” and “Bring to me the anti-venom and make me a sandwich”. It straddles the line between the peculiar and the polished – from Telephone Free Landslide Victory to the present day.

The cover of Status Quo‘s Pictures Of Matchstick Men from 1989’s Key Lime Pie goes down well, again largely thanks to Segel’s violin, although it’s surprising that it came so early in the set – it got to Number 1 in the US alternative chart, after all. All Her Favourite Fruit, also from Key Lime Pie, then follows; again, considering the lack of a soundcheck, it sounds precise – yet some doubts grow. For a band that has eccentricity and diversity at its heart, their presence veers towards the prosaic at times. That delay in getting her perhaps tells somewhat here.

It isn’t until they get into songs from Telephone Free Landslide Victory that things perk up. Instrumental Mao Reminisces About His Days In Southern China – surely one of the best song titles ever – sounds as exciting and varied as it does on the album, fusing punk with world music, while the inevitable but necessary rendition of Take The Skinheads Bowling sounds just as exhilarating live as it does on the album. Yet judging from the crowd, they don’t seem that intent on dancing or even reacting. Apart from the odd one or two at the back, the rest stand around, intent on listening. Who’s right here? The hardcore fans, or those dancing? Does dancing somehow acknowledge that you only know them through their most famous song? Surely there’s nothing wrong in dancing here?

Josephine, again from the new album, follows, the band sounding emboldened now, with hints of Pavement coming through here. Saying that, this is from the band that arguably influenced Stephen Malkmus and the rest. Penultimate song Tania, from Our Beloved Revolutionary Sweetheart, has that Russian sounding, Eastern European swagger that makes it irresistible live, while She Divines Water is one of those acceptable love songs that touches on the mysterious and puzzling aspects of romance instead of the nauseating and mawkish.

It’s difficult to judge this evening. While Lowery and the rest deliver what one associates with Camper Van Beethoven, they at times struggle to keep one’s attention – as alluded to above, perhaps those traffic jams took their toll. Nevertheless, the positives outweigh the negatives.