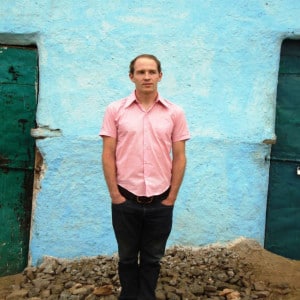 OK, now it’s fair to say that Caribou at Dingwalls was entirely boombastic. This is not to imply that the gig had a degree of libidinal dancehall cache, just that boom seemed to be the operative word, if you’ll permit me the semantic leap.

Released earlier this year, Caribou’s Andorra album is their / his best stab yet at a coherent musical vision, a Syd-like, boffin-born symphony of floral grace, acid wonder and fuzzy thump.

After the bumpy ride of 2005’s The Milk Of Human Kindness, Andorra offers up a smooth ride into Daniel V Snaith’s back-to-the -future UFO club aesthetic.

Falling back on its predictive metaphors, the NME even called it ‘the sound of the summer’ earlier this year. But thankfully, even to the casual listener, Andorra sounded nothing like a constant downpour.

That said, bathed and baffled as they were by the bottom-heavy Dingwalls sound system, the overall effect was something akin to water torture.

But whereas Snaith’s groovy quartet were enveloped by the sonic boom, freaky support act Dirty Projectors erred on the side of an insistent trebly screech occasionally spliced into pieces by seemingly random pummels of the drum kit.

Dirty Projectors won’t be to everybody’s taste, but nobody can accuse them of being unoriginal. Hooded front man Dave Longstreth pulls odd Contortions-like funk-squeaks out of his guitar while consistently goosing his neck like an Egyptian Bernie Clifton.

Though the band often appeared to be playing different songs at the same time, some real sparks came from Amber Coffman, fashioning whammy-bar resonances from her own axe that could’ve found a warm welcome on a King Sunny Ade record.

They may harbour loony-bin harmonies and form-shirking arrangements, but somehow one feels Dirty Projectors will ‘make it’ in a cultish, Captain Beefheart sort of way. And on a more sinister note, there was something of the David Koresh about Longstreth, and just a shade Manson, particularly so with the flanking of two female musos.

After the Dirty Projectors’ ‘difficult’ set, revolving serenely in the catherine-wheel psychedelics of Andorra promised blessed relief. But once the band launch full-throttle into Sandy, the dominant sound is one snare-blasting cacophony.

Snaith himself doesn’t possess the world’s most forceful voice in musical history, but its gentle high-register is a integral part of the Caribou mix. But lost in this wind-tunnel of noise, it’s just so much will-o’-the-wisp.

By the time She’s The One arrives, there is some clearing of the ways, sonically speaking. In an alternate universe, this would have been the album’s hit single, an electric 21st century torch-song. She’s The One’s traditional structure overrides the mixing desk’s propensity for pumping up de bass, but it still sounds like a battle of wills.

Eli is the kind of record that Oasis dream of making if they weren’t set on stomping over the ’60’s in clumpy, blokey bovver boots. Snaith has drenched the song in a kitchen-sinks worth of effects and echo. Here, it just lumbers along, addicted to bloody bass, as much use as listening to the Ringo parts of Revolver.

Don’t get me wrong. There was probably a great gig here, and one that lit the Caribou band in all their techno-coloured finery. It’s just that we didn’t get to hear it.