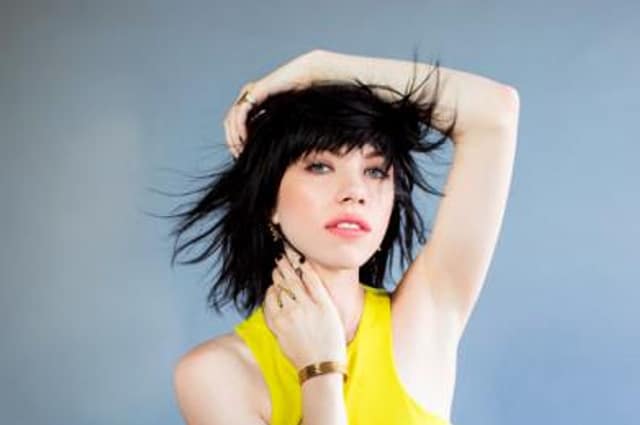 Nineteen songs in, Carly Rae Jepsen issues an ultimatum: we all have to sing along with the next song, or her band stop playing. But there’s little chance of this. Inevitably, it’s Call Me Maybe, and the sell-out crowd are on their feet, enraptured, mouthing every indefatigable syllable. It’s the penultimate song of the set, and Jepsen has barely put a foot wrong.

Given the size of the venue – around 800 of us are crammed in, a microscopic fraction of the number that viewed her breakthrough hit on YouTube – some might have expected tonight’s show to be a short, dialled-down ‘club gig’ prior to her larger US and Canadian tour, perhaps making use of the odd backing track. Not so: she’s joined by a full band, and from the saxophone intro to Emotion opener Run Away With Me, breaking through the screams that greet her arrival, it’s every inch the big pop spectacle.

Emotion – Jepsen’s near-perfectly conceived third album – arrived in the UK in September after an apparently oddly botched worldwide release campaign, peaking at Number 21, and every song features tonight, along with a few of the deluxe edition’s bonus tracks and selections from its predecessor Kiss. Making The Most Of The Night is second up, a slinkily shifting verse – with hints of Whitney Houston’s It’s Not Right But It’s Okay – displaced by a bold, dramatically climbing chorus that’s fresh from Pete Waterman’s Hit Factory.

The tolerably naff Good Time (on which Jepsen guested for Owl City; think The Postal Service channelling Aqua) aside, it’s hard to find a fault with the dozen or so songs that make up the main body of tonight’s set. This Kiss’ Trevor Horn string stabs show that Emotion’s dalliance with ‘80s pop was nothing new, while the driving synth bass and In The Air Tonight tom-tom fills of the achingly lovely Your Type are a huge hit with the adoring crowd. The performances shine a new light on some of the slightly lesser material as well; Let’s Get Lost in particular benefits from a beefed-up sound and a saxophone turn from one of her versatile sidemen.

It helps too that Jepsen can really, really sing, needing no costume changes or surprise onstage guests to hold the attention: the dubstep-Starship Gimmie Love starts off smouldering but soars; she flits between tender, cracked and full-throated on the superb When I Needed You and, during a final I Really Like You, when a wag in the crowd throws a flashing Santa hat onstage, Jepsen catches it one-handed, flips it over and puts it on without missing a beat.

Between songs, too, she’s a delight, adding little details explaining the inspirations behind her songs: Emotion’s title track is about an ex that she doesn’t want back, but wants never to be forgotten by; LA Hallucinations her love/hate relationship with the City of Angels. Meanwhile, Boy Problems – a set highlight – sends up her own preoccupation with man trouble.

Excluding a brief lull towards the end, during an acoustic number with long-serving guitarist Tavish Crowe and the plush, awkward teenage slow-dance of All That, which don’t quite maintain the interest of some of the crowd, Jepsen’s 21-song, 90 minute set is a pop masterclass, from a singer-songwriter who manages the rare feat of being both YouTube sensation and underrated – or undeservedly underselling – critics’ darling.