by Helen Clarke
published: 29 May 2016 in Live Music Reviews
Tweet 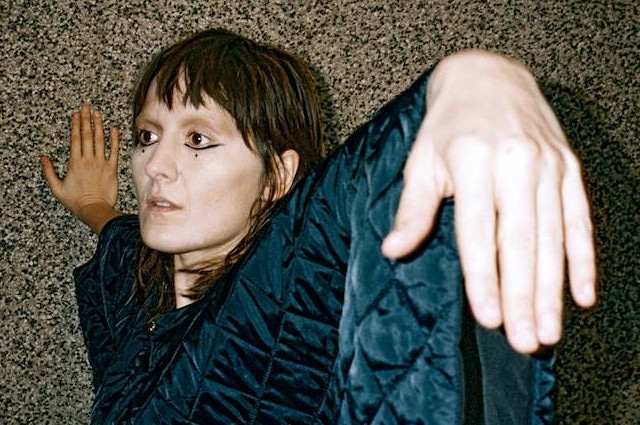 Breaking through the ambient, drawn out humming and flooded red light that announces her arrival, Cate Le Bon looks more like a sulking, pouting Nico than the kooky whirlwind that embodies her most recent album.

In fact, as she opens tonight’s set, with the skeletal east London gas holders looming through the glass-backed bar, she initially seems a shadow of that overblown, St Vincent-ish character that oozes throughout Crab Day.

All static electricity, crumpled, nervous energy driving zany percussion, it’s a brilliantly flamboyant, eccentric record. It’d be quite easy to turn it into a live spectacle. Le Bon, however, doesn’t do that. She chooses the arguably trickier option of translating it in a more orthodox fashion; just her and her band. It leaves her quite vulnerable; not least because it shows up the sheer gulf between her earlier, revered work and this more unusual of albums.

She opens with the record’s namesake. Crab Day, along with the wonky-pop of Wonderful and the Gorkys-ish I’m A Dirty Attic is a perfect ambassador for her latest album. However it’s not all cut from the same cloth; Love Is Not Love is dark and remorseful; a melancholic guitar steers her refrain: “Sing my name again love.”

Le Bon, while now an LA resident, is of course Welsh, and her voice has a haunted, other worldly quality to it; at times hushed, at times it bellows, with a sort of Scandi/Icelandic lilt. She uses it to wonderful effect; it’s a true instrument in itself. For example, in one of the set highlights, I Was Born On The Wrong Day. Shrouded in orange light, her voice becomes flutish and supernaturally high, flitting along with dextrous piano, a simple, dainty rhythm that opens up into a crescendo of chaotic percussion. It straddles the line between her previous, more ordered work, and the odd-pop of Crab Day.

Some of that work is keenly lapped up by pockets of long standing fans. The campfire sing-along of Are You With Me Now? is lush and warm. An emotionally charged track that really couldn’t be more different to the more evasive tracks that dominate tonight.

She ends with What’s Not Mine. Following a protracted outro, she climbs onto the amp, the spotlight turning her into a silhouette. It feels like a suitable, subtle climax, as Le Bon soaks up the limelight but retains her privacy, we’re allowed a glimpse into her world but she remains firmly a woman of mystery.