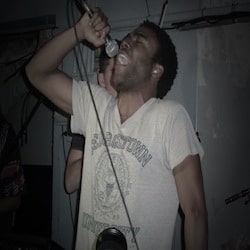 Not yet 30 years of age, Donald Glover has packed a lot into his young life. Stand-up comedian, writer on Tina Fey’s glorious sitcom 30 Rock, a regular role on the critically adored yet criminally underwatched TV show Community and figurehead of a campaign to become the first black Spider-Man.

Now he’s added another string to his bow as Childish Gambino, a hip-hop persona with a name chosen from a Wu Tang Clan name generator. He made his name with two mixtapes in which he rapped over a succession of American indie acts such as St Vincent, Sleigh Bells and Yeasayer, before confirming his talent with the ferociously confident Camp album.

Although Glover’s roots are in comedy, his rap material never relies on easy laughs – this is thoughtful, witty hip-hop delivered with some panache. And although he’s certainly not short of dropping the ‘N’ or ‘B’ word, he steers clear of any rampant misogyny or homophobia.

There’s a definite sense of occasion for Glover’s first ever UK shows at the 200 capacity, underground, low-ceiling venue of CAMP, and when Glover bursts onto stage via a side door, the crowd erupts. As he and his five-piece band launch into Hero, Glover bounces around the stage, hands waving, eyes bulging and working the audience beautifully.

With a set list leaning understandably heavily on Camp, he also throws in early EP tracks and the Grizzly Bear sampling Bitch Look At Me Now. The energy levels never let up for a minute, with Glover diving into the heaving crowd at one point who recite every word of every rap back at him. Just in case anyone’s in doubt about his qualities as a rapper, he even improvises a full five-minute freestyle, never letting his flow drop for a moment.

The highlights are numerous, with an incendiary Bonfire, a version of Heartbeats that has the entire crowd jumping in unison, and a guest appearance by Sway during All The Shine all standing out. He even finds time to throw in a cover of Adele‘s Rolling In The Deep (Glover rapped on Jamie xx‘s remix of the track) and a superb rendition of Break, the acoustic guitar led, Beach House sampling cover version of Kanye West‘s All Of The Lights.

The only quibbles are a lack of an encore, which surprisingly means that album highlights Outside and Sunrise are omitted, but you’d be hard pressed to find anyone complaining at the end of the evening. After a full-on 90 minutes, which ends with a stripped to the waist, covered in sweat Glover rushing off stage back through the side door, the overriding feeling is that this intimate crowd have just witnessed something rather special.