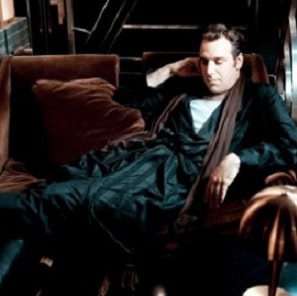 Discounting Hugh Hefner, not many can claim they go to work in their nightwear. Then again, there aren’t many folk like Chilly Gonzales. Tonight’s shift finds him supervising the BBC Symphony Orchestra as part of an expansive tour supporting his second collection of classical material, Solo Piano II.

Much like the man himself, those in attendance are an unpredictable assortment. Hipsters sit on the same rows as families. Fur coats and Saturday dresses rub shoulders with plaid shirts and moustaches. Three rows in front, a couple of immaculately turned out, seasoned-looking proms goers stare disapprovingly at the neon laced Nike pumps bouncing down the steps to sit across the aisle. On stage a grand piano dominates, flanked by a gold harp; a huge gong and two sizeable drum sets. Earlier in the afternoon Gonzales had tweeted: “An orchestra is the world’s most expensive synthesizer” and he played up to this like a wide-eyed child given the keys to Hamleys.

To say Gonzales’ approach to the whole event was unorthodox would be an understatement. Whilst the warmth and voice the orchestra generated as it complemented Gonzales’ compositions was obvious, you could see the look of both puzzlement and merriment written across conductor Jules Buckley and the rest of BBCSO’s faces as Gonzales slapped away at the piano, flicking notes like a DJ whilst dropping jokes about his Jewishness, World War II, Wagner and Mitt Romney. Who else would attempt to make an orchestra combine Queen, Michael Jackson, Britney Spears and the Knight Rider theme into a concerto? Or crowd surf down Barbican hall three times? Or give a young girl a live piano lesson onstage and build a composition around her notes? It was the least one might expect when he came onstage, a little shyly at first, just past eight o’clock in a navy and purple night robe and green slippers. Easing into the delicate yet more upbeat material from Solo Piano II, it felt more like we were in for a long two hours with a rather extroverted, multi-talented musician who has a penchant for rap and electronica.

In another life Gonzales could moonlight happily in the comedy arena such was his deadpan showmanship. He was, however, undoubtedly at his best in front of the piano. Whether it was for the solemn Minor Fantasy, the pulsing staccatos of Evolving Doors or the incredible moment after the encore where he sat under the piano cross legged to play amedley of Gogol and the jazzy Overnight. It felt like running around in that eccentric dream world that exists between him temples. Perhaps the nightwear isn’t merely for comfort.