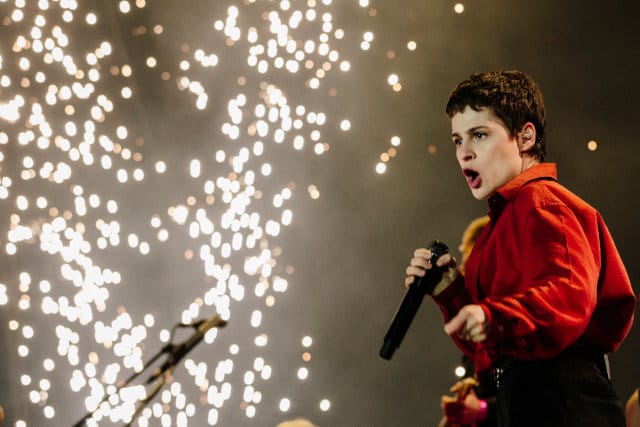 Having kicked off with headline sets from The Chemical Brothers and The Strokes, the first three-day weekend of this year’s All Points East drew to a close with a varied range of artists converging on Victoria Park for what was ultimately a successful, if a little at times unspectacular, event set across six stages largely familiar from their 2018 debut incarnation. Sound issues that had reportedly adversely affected the previous day had thankfully been cleared up. 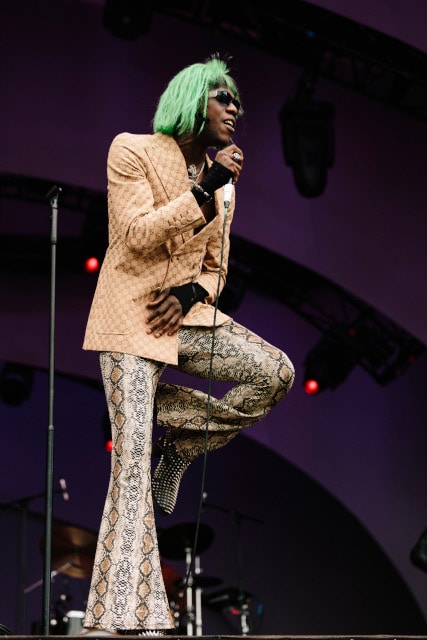 An early highlight came in the form of sometime Mykki Blanco collaborator Yves Tumor who, these days augmented with a full band, delivered a punchy set on the outdoor North Stage that took last year’s Safe In The Hands Of Love album as a starting point but pushed it in a far more thrashy, confrontational direction.

His fluorescent green wig, not to mention the rest of his eyecatching attire, may provide a visual shock-factor, but his music isn’t far behind as – after a deliberately slow start – he spends most of the set interacting with the crowd, seeking out and provoking reactions up close. He seems as delighted as his audience by what ensues.

Next, over on the East Stage, the suited and booted Baloji brings a different, irrepressibly upbeat energy, showcasing highlights from last year’s excellent 137 Avenue Kaniama album. Songs like L’Hiver Indien and Bipolaire, coming at the same time as some welcome afternoon sunshine, see the Belgian-Congolese connect well with the crowd, with Glossine (Zombie) finally kicking off some dancing worthy of his frequent shimmery hat-and-scarf accessorisings.

Princess Nokia, in the tent known as the West Stage, starts with a bang, all powerful bass and impactful hip hop delivery. “Don’t you fuck with my energy,” she vehemently implores during Brujas, throwing shapes as she does. There’s little chance of that happening – most of the crowd gathered in the West Arena are resolutely behind her, directly feeding off the buzz she’s creating. 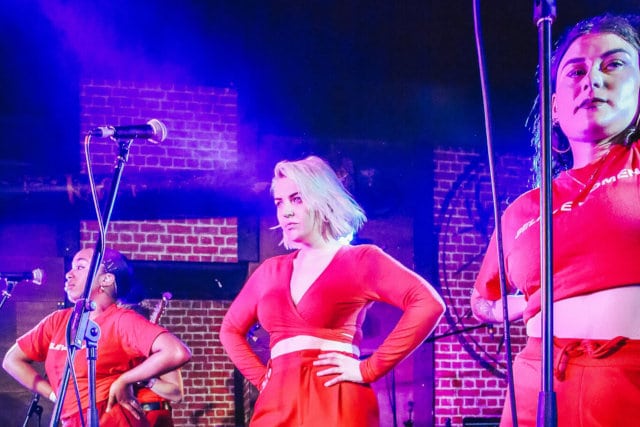 Self Esteem @ All Points East, London

Self Esteem, the new project from Slow Club‘s Rebecca Taylor whose debut album Compliments Please appeared just a couple of months ago, strut on to the tiny Jagerhaus stage, squished into the corner of an ersatz barn, and it’s a performance that immediately suggests this project will own considerably larger spaces before much longer. Harking back to melodic girl groups from The Supremes to The Pipettes, faultless gospel choir-like vocal harmonics marry charismatic moves and big, bold songs with all the hooks, the sum of the parts being fantastic, memorable pop in sync with itself and its surroundings. They are rapturously received.

Beach House meanwhile offer an altogether different proposition. Their set focuses mainly on their last three albums and, in typical Beach House style, sees them ally dark, cosmic energy to introspective, emotional pathos. Dark Spring immediately projects an interstellar dreaminess into the tent, Space Song is the sound of the stars communing with the earth, while 10 Mile Stereo is still very much a beating human heart transplanted to a warmly glowing sonic edifice. In short, they offer music of ever-increasing returns. 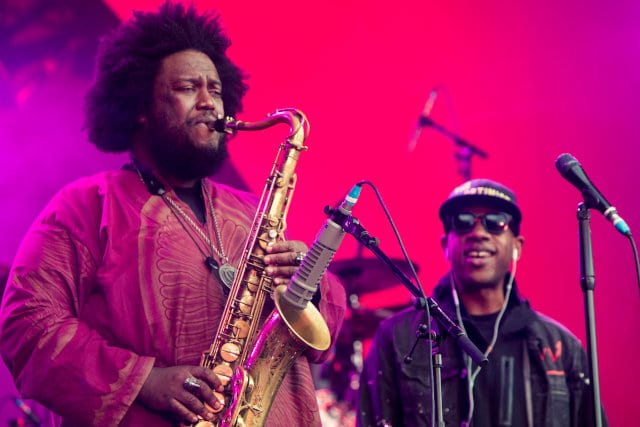 Kamasi Washington has established himself as something of a spiritual tour de force over recent years but today he only has just under an hour into which he must somehow cram his burgeoning musical universe. Yet, with breezily transatlantic, melody-rich tracks like The Rhythm Changes and Truth he succeeds, proving he still creates music from an altogether higher plane.

Metronomy, after two decades of existence, are veterans of London festival stages, and for good reason – their music sounds quintessentially summer, not least given their last album was titled Summer 08 and perhaps their best known track, The Bay, came complete with a video full of summery vibes and lovely shots of Torquay and Torbay. It’s given an early outing in a set that selects choice cuts from across their career. The current line-up have played together long enough to be an impressively tight unit, and they look as though they’re still enjoying themselves throughout to boot – enthusiasm that readily translates to the audience, despite the gloomy skies above. 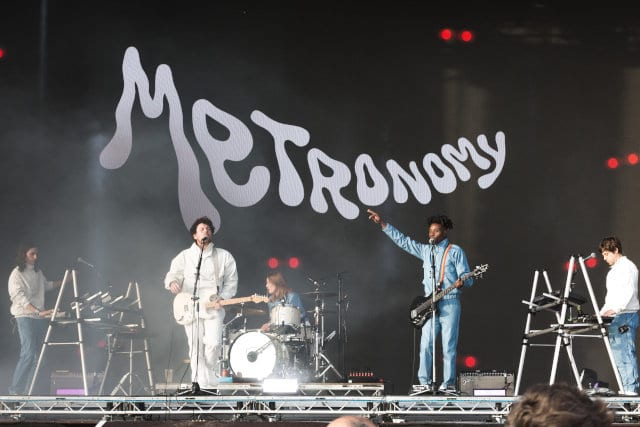 Maribou State have developed into a classic festival band. They have crossover appeal, a youthful positivity, prominent sampling and a range of guest vocalists which sees them tick all festival boxes. Their set today is equally divided between 2015’s Portraits and last year’s Kingdoms In Colour. If you wanted to damn them with faint praise you could say they occasionally sound like trip-hop rebooted and expanded for the 21st century but they go down a storm. Holly Walker provides immaculate vocals on Steal and Glasshouses while the rest of their set deftly pieces together propulsive electronica, progressive urban soul and uptempo pop into one seamless whole.

Christine And The Queens is a commendable if brave choice for headliner, but she gets off to a flying start with Comme Si as she bursts around the stage surrounded by a cohort of dancers and sparking fireworks. The set soon turns into a celebration of both her and her sexuality (and non-binarity in general) and she’s on the receiving end of vociferous support from the crowd. “No judgement, only love!” is an early call. 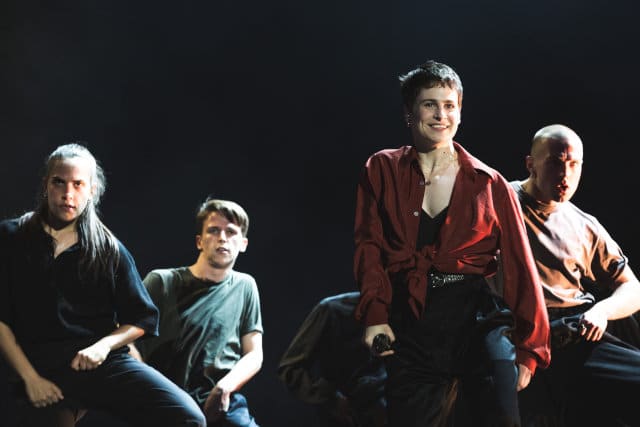 Girlfriend is confidently despatched early on and Science Fiction, Tilted and 5 Dollars all make strong impressions amid the theatrical interplay, podium excursions and outfit changes, but there are a few dips along the way. It’s understandable really – she’s only on her second album (a fact she acknowledges to the crowd). She also mentions how this is her first festival headline appearance – which seems to be part pride, part context-setting/expectation management. It raises wider points about headliners and the relative lack of names coming through to take these spots, but of course none of this is connected to Chris – she does a fine job given her as yet modestly-sized catalogue.

Her brief cover of Nasty by Janet Jackson fares better than her underplayed version of Heroes by David Bowie and the closing stages unfortunately see things fizzle out a little (just as a small fire worryingly develops and is extinguished under one of the large screens to the side of the stage). Despite tonight’s fluctuations she’s undoubtedly on an upward trajectory. With more material and big event experience under her belt, in future these occasions should be more polished and balanced, but for now it’s hard to criticise too much.

The set ended a day on which summery weather conspicuously failed to arrive, but on which All Points East delivered summery vibes anyway, declaring the UK summer festivals season to be officially open.

Words by Steven Johnson, with additional reporting by Michael Hubbard