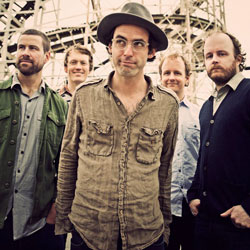 It seems strange to think that only six years ago, an unsigned band using the internet to promote themselves to a worldwide audience felt like a thrilling new development for the music industry. In 2005, New York jerk-pop group Clap Your Hands Say Yeah briefly fronted a group of online pioneers (including bands like the now-almost-forgotten Tapes ‘n Tapes) that could drum up hysterical plaudits just by hurling their demos into the ether, while record companies desperately scrabbled to stake a land-grab in the new frontier.

CHYSY had, of course, an advantage over most of their contemporaries – their songs stacked up against the hype. The jittery, Talking Heads post-funk of early MP3s In This Home On Ice and Is This Love were truly thrilling compared to the big, emotive soft rock that filled the charts, with lead singer Alec Ounsworth’s fitful falsetto acting as a neat counterpoint to the stadium-ready anthems of bands like The Killers. A self-produced, self-marketed, eponymously-titled record did incredible business (300,000 copies sold) but their second – the odd, swoony Some Loud Thunder failed to cement their reputation as contrary icons, and even their fans did a double-take when third record Hysterical fell out of the sky this month.

But it hasn’t stopped the band selling out a clutch of shows on their first jaunt around Europe in three years – and tonight’s concert at Kings Cross’ baroquely obstructive Scala (seriously – this is a place with not a single decent sightline) is filled to bursting with a veritable menagerie of hipsters. They’re treated to what is, despite some uneven patches, a beefy, energetic set by a band that may never recapture the fleeting magic of their flirtation with the bleeding edge zeitgeist, but one with enough un-ironed quirks to keep things interesting.

Opener Same Mistake is a case and point – seemingly a stab at just the kind of synthy, Killers-style rock anthem you rather hoped they’d never churn out, Ounsworth’s almost impenetrable drawl gives it an off-kilter feel – like All These Things I’ve Done sung by Dirty Projectors. Rather wisely they throw in perhaps their best crowd pleaser, early single Over and Over Again (Lost and Found), close to the beginning of the set, and from then any unease about the band’s new work is subsumed into a hugely good-natured indie disco – replete with grown men leaping into each other’s arms ecstatically whenever the opening bars of a recognisable track are aired.

And there’s lot of them – a quick trawl through their back catalogue reveals that CYHSY have a veritable arsenal of quirky floor-fillers, where even ones that you’d forgotten about crawl up to you and start tugging at insistently at your ankles. The Talking-Heads-by-any-other-name funk of Upon This Tidal Wave of Young Blood and unhinged, harmonica-led pop of Heavy Metal feel surprising ‘now’, despite being six years old, but it’s the dark, propulsive Satan Said Dance, stripped of some of the more outlandish production ticks that hampered the second record, that inspires the most frenzied response in the crowd.

Singer Ounsworth has ditched the more hyperactive yelps that turned so many off the band in the early days, replacing it with a kind of relatively tuneful mumble that works fine for most of the new work – new single Maniac, which is perfectly serviceable but rather forgettable, and Hysterical, which, well, sounds a little too much like opener Same Mistake. Perhaps the best of the lot is Ketamine and Ecstasy, which sounds for all the world like an early-period R.E.M. song, but it’s when the band delve into the back catalogue that they seem to feel most confident – a freewheeling Is This Love and a joyful The Skin Of My Yellow Country Teeth round out the night with some aplomb.

CYHSY perhaps couldn’t ever be the band we thought they’d be back when a Myspace account was a badge of honour, not something to be deleted as soon as you can remember the password. But there’s still life in them yet – slowly but surely they’re making the transition from indie upstarts to elder statesmen without selling out their principals.