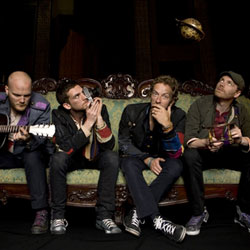 “Thank you for coming to see us. And we’re sorry we’re making you miss The X Factor“. It’s a typically self-deprecating remark from Chris Martin, and one that shows he’s more than aware that Coldplay’s key constituency has changed forever.

For it seems a long time ago that Coldplay were “the new Travis“, a struggling little indie band making ends meet. These days, it’s Hollywood marriages, stadium tours and songs like Fix You and Trouble providing the soundtrack for sob stories on Simon Cowell’s TV talent shows.

Yet it’s a change that Martin and company have embraced wholeheartedly. For this year’s album, Viva La Vida… Or Death And All His Friends, they roped in Brian Eno as producer and for this, the opening night of their UK tour, it seems as if they’ve taken some tips from one of Eno’s most famous collaborators.

There were globes hanging around the Arena, a solitary TV perched next to Will Champion’s drumkit, and walkways extending from the stage into the audience. There was no Trabants or wrap-around shades, but it was a tad reminiscent of U2‘s Zoo TV tour all those years ago.

Like U2, Coldplay are slowly but surely turning into the perfect stadium band. They’ve got the songs – big, epic, and impeccably singalong – but are extraordinarily adept at connecting with their audience by keeping that touch of intimacy.

After an ear-splittingly loud blast of the Blue Danube, the band strolled onto stage, clad in their now trademark ‘French Revolutionary’ gear and launched into the instrumental Life In Technicolour behind some transparent drapes. Soon the drapes dropped, and the portentous chords of Violet Hill kicked in.

Martin was a bundle of energy throughout, sprinting from one side of the stage to the other, treating us to some rather peculiar dancing and stopping every so often to perch above his keyboard to bash out some piano chords. The stage set was impressive as well, often beaming out laser beams into the audience, while the aforementioned spheres proved both atmospheric and sometimes surreally disturbing (imagine a sweaty Will Champion trapped inside a Christmas tree bauble).

The setlist, as was to be expected, leaned heavily on Viva La Vida, but there were plenty of fan favourites as well. The familiar piano chords of Clocks were perfect for a venue of this size, and however much the sickly sentiments of Fix You may grate on you, you’d have to be a really hardened cynic to fail to be moved by the sight of 12,000 people swaying and singing along in unison.

Yet it was those intimate touches that saved this from being just another big arena gig. The walkways extending into the audience were used throughout, with the whole band gathered on one to sing a stripped down God Put A Smile On Your Face, and then a solo Martin version of Trouble (seemingly impromptu as he’d originally started singing The Hardest Part before changing his mind two lines in).

There was even a trip to the back of the venue, when the whole band left the stage and walked up to a balcony near the back to perform an acoustic version of The Scientist (“the song we wished Gary Barlow had written” according to Martin, who even threw in a few lines of Back For Good to underline his Take That appreciation). It was a nice touch for those fans stranded at the back of the Arena, usually so used to seeing their heroes as distant matchstick figures on the stage.

A quick trip back to the stage saw the spectacular sight of multi-coloured ticker tape during the excellent Lovers In Japan and a stirring Death And All His Friends before an encore of the inevitable Yellow (“it’s what brought us here, and it’ll probably be what kicks us out” as Martin explained).

Coldplay receive an awful lot of unwarranted stick, mainly due to how successful they are, and while they may not be the most edgy or revolutionary band out there, it’s impossible to begrudge them their success when they put on shows as epic as this. And no Chris, we didn’t mind missing The X Factor. Not at all.