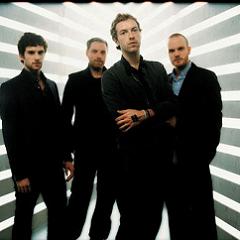 This was one BBC slot we could be sure Chris Martin was going to hang around for.

Given his very public show of dissent on Radio 4 last week, a squeaky clean model was here for Radio 1 listeners, and ran through this free fans-only gig with relative bonhomie.

A promotional tool for Viva La Vida as well as a return to live action in the UK, the night began with a support slot from Jon Hopkins.

His laptop electronics germinated from a murky beginning to stately string lines, with a dubby beat and technicolour animations for company. With Bachian arpeggios countered by at times bruising breakbeats there was a strong sense of the music of DJ Shadow, but the half hour set threw up plenty of invention and developed its themes, marking Hopkins out as an artist to keep an eye on.

Keeping an eye on the restless Chris Martin was rather more of a challenge. The band’s purpose was to present their new album, whilst lifting their hit songs from the drudgery of Monday morning radio to the live environment. This they largely accomplished, though large was certainly the word for Will Champion and his frankly frightening battery of percussion.

The crashing intro to Violet Hill suggested he was about to tackle the Bee Gees‘ long-lost classic You Win Again, while the tub thumping Viva La Vida was one of many drum-heavy moments, removing a lot of the subtleties that were doubtless going on elsewhere.

Violet Hill was, however, one of the standout performances – and generally the new stuff fared well, its Eno dressing retained, though the fans haven’t yet committed it fully to memory. Viva La Vida, introduced here as a way of dealing with England’s failure to reach Euro 2008, the lofty (some might say pretentious) aspirations of Chinese Sleep Chant, a powerful Lost! – all delivered energetically.

Elsewhere the feeling persisted that the band are bringing more and more elements of U2 and even Pink Floyd to the table. The former seeps into more and more of Jonny Bucklands guitar work, in the band’s uniform (they must need a dry cleaner by now!) and in Martin’s Bono-like status, self-inflicted or otherwise. The Floydisms are less prominent, though here lurked in the post-Division Bell landscape of Square One.

To be fair, Martin was in a good mood, giving away a guitar to a lucky fan, still warm from God Put A Smile Upon Your Face. Elsewhere, though, there were a couple of fluffs and the obligatory nod to a faraway song, Girls Aloud‘s Call The Shots spoiling the intro to Trouble but causing amusement at the same time.

Soon the band were on the parapet for an acoustic version of Yellow and, introducing new’ vocalist Holland, a cover of The Pogues‘ If I Should Fall From Grace With God.

From that you’ll gather subtlety was indeed in short supply – so that while Fix You provided the emotional highpoint of the evening the restless mannerisms prevented it from breaking into the stratosphere. A big crowd singalong to In My Place helped, though betrayed the band’s now familiar large scale stage.

Because Coldplay rarely do subtlety these days – even in acoustic form – the smaller gigs are likely to elude them at full volume, and Martin has the energy and charisma, misplaced or otherwise, to fry bigger fish than this. But for now the evidence is at least of a band continuing to develop, with Martin remaining an enigma, a conflict of intense privacy and publicity. This is clearly what he loves best though – and it still showed here, despite the booming drums.