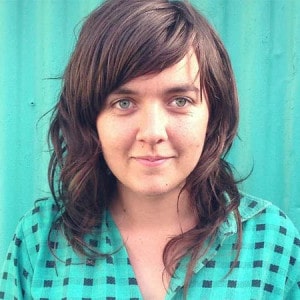 So when someone calls out complimenting her t-shirt she responds: “Thanks… beat… It cost £3.” It’s not funny. Except the timing is so expertly comic that everyone in the room laughs.

Of course, the fact that Barnett is a skilled raconteur is hardly news. It’s just that in song, she chooses to fill the gaps with extraneous detail – like in An Illustration of Loneliness (Sleepless In New York), when after setting the bleary eyed sleepless scene staring at the ceiling, she diverts into considering the colour (“It’s a kind of off-white / maybe it’s a cream”) – while in person, into the gaps she inserts silence.

There’s no doubt, both Barnett and her band are extremely likeable. They’re relaxed, easy-going and the music maintains a sense of breezy jauntiness. The opening Elevator Operator is jangly and with plenty of Stephen Malkmus-like slackness, the aforementioned An Illustration of Loneliness (Sleepless In New York) has some real Antipodean sun in its step, despite the lyrical melancholia.

As the show progresses, things get grungier and louder. Surprisingly loud, actually. Barnett at the front of the stage, throwing rock star shapes, flinging her hair and flicking at her guitar with a splayed hand. On Small Poppies that makes for a woozy, drunken sounding thrash, with the song, and Barnett, lurching about. On Nobody Really Cares If You Don’t Go To The Party, she’s down on the floor, wrenching chords from her instrument, making noises which don’t appear on the album.

It’s a lot more rough and ready than on record. Which isn’t a problem. What’s more of a problem is that after a while, it does all get a bit samey. There still some nice distractions, Depreston is lovely and sad, with a (oddly appropriately for central London) sing-a-long moment, as the crowd join in with the “if you’ve got a spare half-million / you could knock it down / and start rebuilding” chorus with the vaguely regretful tone of a generation staring longing at the property ladder, and the way Pedestrian At Best is delivered as a splat, or indeed a Lump (in the Presidents Of The USA sense of the word) is great, but some of the set is forgettable.

As she rather presciently spotted, she has recently been placed upon something of a pedestal and alas, against such high expectations, there is a much higher risk of being slightly disappointing. Courtney Barnett has plenty of charm, and slatherings of wit. That she’s not quite yet the finished article suggests her stature will only increase.