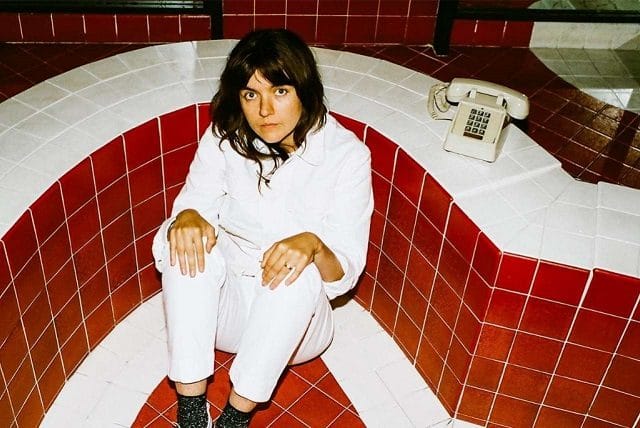 The most common complaint in live music is that artists too freely indulge in their new material. Tonight’s Courtney Barnett gig puts the objection to the ultimate test, coming as it does just shy of two weeks after the release of her second album, Tell Me How You Really Feel. Not only does Barnett indulge in it, she plays the whole damn thing from start to finish. Unannounced.

It’s a test of the bulging Roundhouse crowd, not all of whom can possibly be the brand of diehard fans that would already have made themselves familiar with the new record inside and out. Consequently, as Barnett and her three-piece band embark on their journey through the album, it is met by a sea of courteously nodding heads rather than full body experiences.

The record is very strong, another chance to revel in Barnett’s acerbic, deadpan high-mundane observations, and compared with her previous work it is a more compressed, guitar-rocketed set of songs too. She appears to be more comfortable letting her playing take centre stage, coming to life during the breaks between vocals. The comparisons are familiar now, but on tracks like City Looks Pretty and the addictive Need A Little Time, she calls to mind the days of Pavement and The Breeders, relishing letting the songs teeter on the verge of falling apart before rescuing them with a melody line and launching into a rousing final verse/chorus.

Nameless Faceless is the most intense of the new ones, both from the stage and in the crowd, Barnett’s voice breaking as it reaches its climax. But overall, the audience is best described as respectful at this stage. Perhaps a few months down the line, the response would have been more intense, or perhaps the new material lags slightly behind the old, something only exacerbated by Barnett’s choice to play the new album in its entirety. What was the shock of the new a few summers ago has become merely the expected.

“We put out an album last week, and that was it. Thanks for listening,” is her intro to album closer Sunday Roast, but nobody believes this signals the end of the night. Sure enough, at its conclusion, her words draw the biggest cheer so far: “We’re gonna play some more songs now. This one’s Avant Gardener.”

Arms immediately begin to flail, and the warmth in the room turns to a sort of angry passion. Her tale of asthmatic attack is just the beginning. It is the first of seven songs that may already count as classics, from the delicious wordplay of An Illustration Of Loneliness (Sleepless In New York) to the mass singalong of Depreston. Flat melodies are her hallmark, so clearly familiarity counts for a lot. The disaffection and philosophical apathy of her writing has evidently struck a chord here, just as it has everywhere she plays, something that speaks perhaps to the times that have inspired her.

By the time she burns through a raucous Elevator Operator and History Eraser, it has been a long night, but the crowd are just reaching their peak energy. Upon her highly-demanded return, she shows a rare vulnerability in her touching rendition of Anonymous Club and by now the love in the room is borderline overwhelming. All that remains is an explosive Pedestrian At Best and the curtain falls.

The same consternation and world weariness that made her lift a pen in the first place has sold out the Roundhouse and has lifted her people to a better frame of mind. If that isn’t a display of the power of art, then maybe there isn’t one.