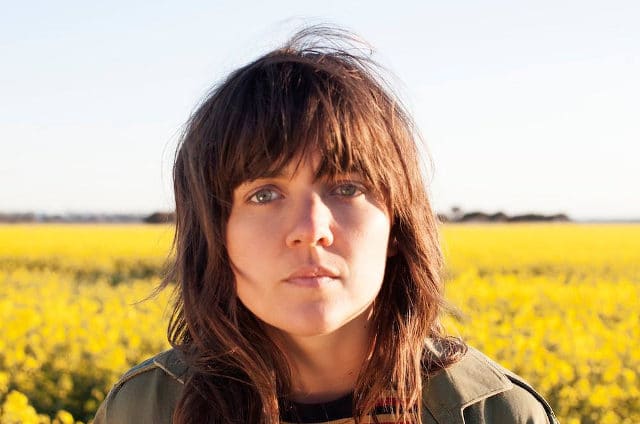 Getting things off your chest can be a huge relief. So when the hashtag #indieamnesty trended briefly on Twitter in early April, hundreds jumped in, both feet first, to tell their own stories, confessing their early noughties indie-scretions. Between all the Rakes revelations and Pigeon Detectives divulgences, though, Bill Ryder-Jones took an early lead when he tweeted “Was in the coral”. Beat that.

He peers out at the crowd through his tousled fringe, asking if we’re looking forward to seeing Courtney Barnett. We are, it turns out. “Me too,” he says; “but I’m getting paid… or at least they are,” he adds, glancing at his four-piece band.

It’s a fairly short support slot, but they stretch out the few selections from West Kirby… to fill both the time available and the grand space. The closing, tumultuous Satellites and Two To Birkenhead stand out, full of fuzzy, frowzy guitar, Ryder-Jones wringing his Jazzmaster like a Mersey J Mascis. “They say that desperate times/call for desperate pleasures” he sings on …Birkenhead. The times may be desperate, and the songs may come from dark places, but here the pleasure’s all ours.

Appearing in London for the first time this year, joined by bassist and drummer Bones Sloane and Dave Mudie, Courtney Barnett seems similarly laconic at first. She packs her songs with the self-deprecating wit and ingenuous shaggy-dog stories we’ve seen across her EPs and 2015’s debut full-length, but prefers to say little inbetween, rushing from the buoyantly anti-big business opener Dead Fox through to Scotty Says and the obstinate, hearfelt Debbie Downer – “I’m sorry for all my insecurities, but they’re just a part of me”.

The trio slow a little for An Illustration Of Loneliness (Sleepless In New York), the blueprint of Doug Yule-era Velvet Underground scrawled with psychedelic, glassy slashes of guitar from Barnett. Despite the nonchalant demeanour, she’s a fascinating presence onstage, and the absence of her previous lead guitarist is barely noticeable as she tears chunks out of her strings, hunched over, during a squalling Small Poppies.

If there’s a downside to Courtney’s live performance – and it’s far from a unique observation – it’s that all the wordplay and quirky narratives can get a little lost. The songs which tend to come over best are those with hooky choruses, but there are so many of these it’d be churlish to feel short-changed: Depreston is starting to feel like a modern classic, and is followed swiftly by recent single Three Packs A Day – a harrowing tale of ramen addiction(!) – along with the crackling grunge-pop of Pedestrian At Best. “It feels like the Queen should be watching this,” Courtney grins before Elevator Operator, looking out at the almost incongruously grand venue.

Given the fairly early finish, there’s not a lot of time left, but a thrilling Kim’s Caravan and Avant Gardener – still the catchiest song imaginable about the panic of an asthma attack – are just the shots of adrenaline the crowd need, who roar their appreciation as the band leave the stage.

We’re treated to a solo Ode To Odetta, making a rare appearance according to Barnett, before the band reappear to tear through FOMO riposte Nobody Really Cares If You Don’t Go To The Party. “Yes I like hearing your stories/but I’ve heard them all before”, she sings. But telling stories is rarely such visceral fun.