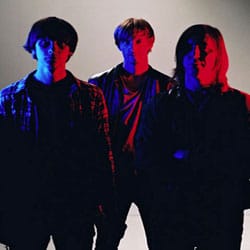 It has been three years since Australian synth-popsters Cut Copy released In Ghost Colours, so their recent third offering, Zonoscope, has been a long time coming for their dedicated following.

The stage and crowd are warmed up by New York dance duo Holy Ghost! who get the crowd dancing immediately with their infectious brand of electronica. They are the perfect precursor to Cut Copy, providing a similar sound.

The focus of this set is the new album, of course. It’s fair to anticipate that Zonoscope World Tour is going to promote the new album courtesy of a set list laden with those tracks less familiar replacing crowd-pleasing past hits.

It’s a welcome surprise when the Melbourne four-piece crack open the 12-track set with a couple of favourites from Zonoscope’s 2008 predecessor. There are never more than two Zonoscope tracks back-to-back. The bulk of the set is littered with the select favourites from their 10 year history including Lights & Music and Hearts On Fire.

It seems that the Forum’s crowd wouldn’t really care either way, as most of them are mouthing along to Dan Whitford’s lyrics. Zonoscope seems to have continued with the ’80s influence, but exploration of genre is evident with this new offering. Take Me Over kicks off and it is clear that there is more than just a smattering of Fleetwood Mac‘s Everywhere infused here.

A door, centred on the stage, dwarfs the band and their otherwise rather barren stage set-up. As the set progresses, projections accompanying each song are emblazoned on the door, although it does err on the side of tacky when the set builds momentum up to Pharaohs & Pyramids and trippy multi-coloured pharoah-esque figures appear. It’s all a little too obvious.

The encore is a good mixture of new and old, with current single Need You Now and Out There On The Ice getting the entire crowd jumping up and down. Their 70-minute set is over all too quickly.