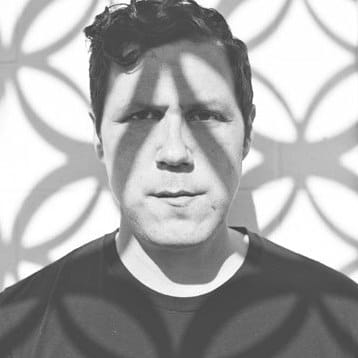 It’s weirdly fitting that this intimate acoustic performance from Damien Jurado comes only a day after the terrestrial TV premiere of 127 Hours. Announcing at the start that he’s been suffering from pneumonia and only recovered his voice a few days ago, there’s a feel of heroic survival against the odds about the American singer songwriter tonight. The stage is sparsely furnished with an amp and some provisions – a maxi pack of crisps and a bottle of Diet Coke (“don’t you call it Coke Light here?” he says). Two microphones surround him, one dry, the other reverb-drenched and used to great effect on the more psychedelic and spacious songs like current single Nothing Is The News.

It’s his first show in six months and, accordingly, he sits in his socks to recreate the feeling of being in his living room playing video games with his son. This is apparently what he’s been spending time doing in the run up to the release of new album Maraqopa, his second album with Secretly Canadian labelmate Richard Swift on production duties. He openly talks about missing his son and wishing he hadn’t looked at a photo of him before going on. Perhaps it’s the sense of vulnerability that goes with being ill, but he’s really choked up after an immaculate and understated Working Titles. The song was apparently recorded in one take and maintains a spontaneous feel on the live stage.

He’s apologetic about playing so much new material that the audience doesn’t know yet but needn’t be. The album’s title ballad (introduced here as Free To Be Seen) is among his most dreamlike syncopated melodies. When he does get onto some older songs Rachel & Cali and Cloudy Shoes they do elicit louder cheers from the capacity crowd squeezed into this hot loft. Near the end of his set, he asks for questions. One audience member enquires if there’s a true story behind his old song Medication, a story of a suicidal brother, hinting that he’d like to hear it. Jurado reassures him that it’s not true and then starts to talk about the process of writing the song and how that one in particular taught him to never question anything he came out with.

As he starts talking through the first verse, he nearly takes the bait and performs it in full. However, he breaks off for a sweet Can’t Get Over You and the dynamic, epic closing howl Ghost Of David.