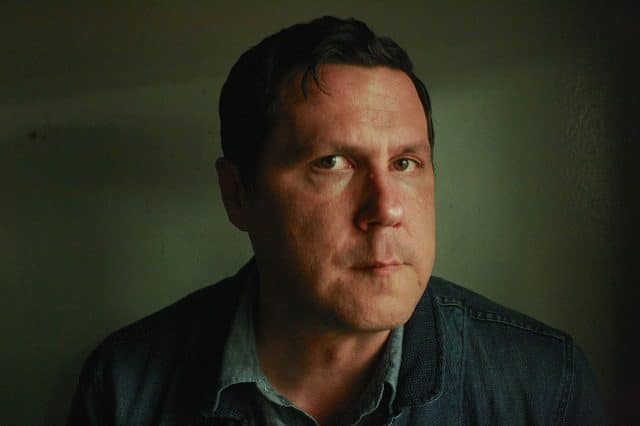 The release of Maraqopa back in 2012 was a significant moment in Damien Jurado’s recent history. It signalled a broadening of his sound and was followed by Brothers And Sisters Of The Eternal Son and Visions Of Us On The Land which were subsequently viewed as completing the ‘Maraqopa trilogy’. They also had a stronger ‘band’ feel than his earlier albums but this is something Jurado has stepped back from on latest album The Horizon Just Laughed. It sees him revert back to a more traditional ‘solo’ sound, still introspective and self-examining yet also sounding fresh and new.

Tonight at Union Chapel however he starts with two songs from his 1999 album Rehearsals For Departure. Saturday and Ohio are both softly-delivered and a nice concession to his dedicated fanbase before he reverts to more recent material. They also feature Josh Gordon on guitar, as does the rest of the set, an arrangement that works well, allowing extra detail and embellishment to be layered in where needed.

Tracks from The Horizon Just Laughed form the main body of the set. Allocate is forlorn and serene while Dear Thomas Wolfe has an airy, Lambchop feel. Musically, Percy Faith is the happiest and most liberated Jurado has sounded for a while and tonight glides by, assisted by Jurado providing wordless backing vocals to himself. Marvin Kaplan has a similarly untroubled feel that improbably recalls Swedish acoustic-folk act Kings Of Convenience. They hint at how he has started to slowly outstrip his alt.country past.

In the context of the album they stand apart in terms of mood, with most of the songs sounding exquisitely sad and beautiful. The Last Great Washington State unfolds patiently eventually arriving at its crestfallen conclusion. His final refrain of “I love you Washington State” is one of the most tender and poignant moments of the night (and album). 1973 takes it even one step further, a deeply personal song that sees him interweave themes of travel, financial hardship and self-doubt to stunningly moving effect. It shows he’s still one of the best at bruised, embattled songcraft.

He dips into his back catalogue for Sheets and Rachel And Cali before playing two new songs, When You Were Few and Birds Tricked Into the Trees, which are both sensitively sketched but with melodic impetus. He also covers The Novelist by the late Richard Swift, which he precedes with words that clearly prove that his death is still a difficult, emotional subject for him; “I’m mourning him all the time, missing him all the time”. He follows it by playing A.M. AM (from his Visions Of Us On The Land album that Swift produced). It’s impossible to see it as anything other than a second, soul-baring tribute, with the line of “don’t go changing, I’m not leaving you” sounding especially raw and poignant.

Throughout the show his powers of self-deprecation haven’t deserted him, confessing that he’s never considered himself much of an entertainer while also musing on how drinking water on stage feels like performance art and about the experience of moving to California. For the encore he welcomes support act Naomi Wachira back on stage for a version of Over Rainbows and Rainier. It puts the seal on an excellent performance that proves that his live shows are still highly intimate, rewarding musical encounters.