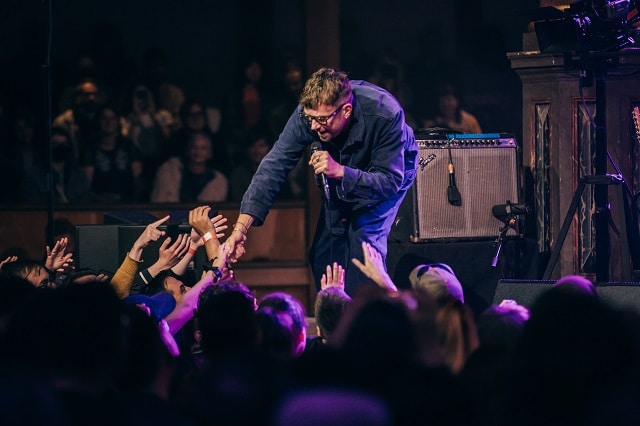 Damon Albarn has spent much of the summer receiving acclaim while bringing some welcome, big-name attraction to UK festival line-ups deprived of international artists. Tonight’s show saw him perform in the more intimate surroundings of Shakespeare’s Globe Theatre on London’s Southbank and while it may have initially felt like a random, if beautiful, juxtaposition in terms of venue, his occasional, nostalgic explorations of aspects of England’s past allied with his observations of human personalities lent it a certain aptness in other ways. Albarn led a six-piece band comprising various previous musical associates, plus a string quartet imaginatively located in the upper gallery of the theatre.

His new solo album The Nearer The Fountain, More Pure The Stream Flows is due for release next month and is, on the whole, a low-key, piano-led affair, dotted with melancholic moments and interesting diversions. Tonight, the opening moments draw from it, the thoughtful ruminations of the title track and The Cormorant being offset by the livelier, Iceland-inspired Royal Morning Blue.

The songs that follow have a disparate, pick and mix feel to them, Albarn taking advantage of the opportunity to dust down some lesser played tracks from his past. Lonely Press Play from Everyday Robots in particular sounds very much the overlooked Albarn classic and as he sings it, he moves forward to individually address and greet members of the crowd, both parties enjoying the re-establishment of physical and emotional connections. Go Back is next, a Tony Allen song from 2016 that featured Albarn on vocals. Senegalese kora player Seckou Keita joins the band to add illumination to the suitably energetic percussion. Later, they play Saturday Comes Slow, a track Albarn recorded with Massive Attack and it arrives with a sense of drama befitting of tonight’s venue. 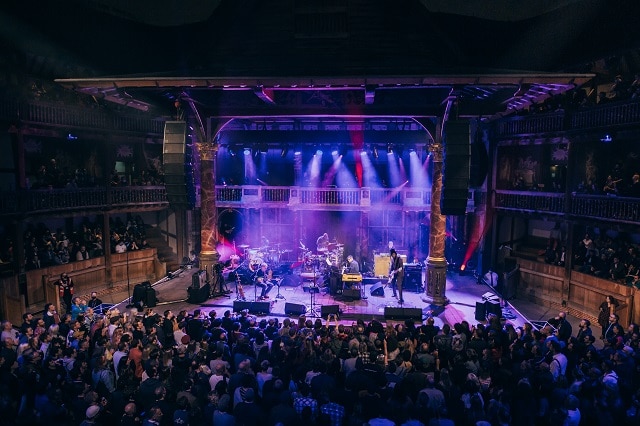 Halfway in, songs by The Good, The Bad & The Queen start to enter the set, initially with Nineteen Seventeen, The Great Fire and Poison Tree from Merrie Land. Later, they career through a rambunctious Three Changes from their eponymous debut, the line about a certain ‘stroppy little island of mixed-up people’ still carrying relevance. The next segment of the show is made up of songs from Albarn’s Dr Dee opera, which sees Icelandic musician Arngeir Hauksson and countertenor Christopher Robson join the band, making notable respective contributions on the theorbo (an extended lute-like instrument) and vocals.

They dip back into The Nearer The Fountain later on and ahead of playing The Tower Of Montevideo, Albarn reveals that the image of an abandoned cruise ship standing in the mist to be one of the key images from the new album and there is a strange sense of mystery in the accompanying track’s muted colours. Particles and Polaris have both appeared ahead of the album release and tonight it’s the expanded, starry impressions of the latter that fares better than the mood-piece minimalism of the former. 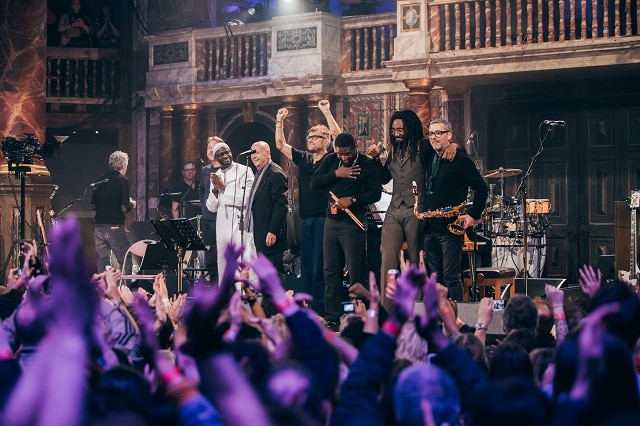 On Melancholy Hill from Gorillaz’s Plastic Beach opens the encore, still sounding endearing and emotive, but naturally it’s the two Blur songs that appear next that elicit the strongest reaction. Out Of Time is embellished in various ways tonight yet still sees Albarn at his most widescreen (it’s also clearly one of his favourite Blur songs). This Is A Low meanwhile remains a supremely poignant moment, both tracks confirming that slow Blur is the best Blur (tonight is surely the closest the latter has been performed to the Thames that is quoted within its lyrics). More Blur songs wouldn’t have gone amiss but by limiting the show to two he elevates them to the heights they deserve. Before he leaves Albarn remarks on a “special night” and it’s hard to disagree, a career-spanning two hours from a much-loved musical polymath who continues to move forward with confidence.