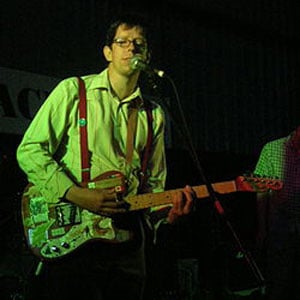 With most gigs there is a repeated and expected dynamic in operation between the gig-going audience and the performer(s) on stage. There’s theatricality comprised of some attempt at costumes, lighting and a set narrative running from opening song through to encore. Rarely does the established format change from one gig to another. But this was not most gigs.

Headlining this Track & Field night, ex-Hefner lynchpin Darren Hayman and his band take to the Luminaire’s stage and for several minutes faff about with their instruments as the DJ continues to play. Audience members shout witty one-liners in Hayman’s direction over the music. He banters back before faffing about some more. Stag stands creak up, down, up again. Hayman could be anybody here, tuning up a guitar in the corner of a pub.

He is a bookish presence, an old jacket and glasses suggestive of a man happiest with words. When he finally does get going he’s solo, singing Hefner’s Greedy Ugly People and accompanying himself with rhythm guitar. The first chorus brings the band – which features fiddle and banjo – in. For backing vocals Hayman’s audience oblige – it’s been a while since they’ve had the chance to sing these everyman songs back at their ukulele-abusing creator.

But songs from new solo album Darren Hayman And The Secondary Modern soon make up the bulk of the early part of the set, headed by Let’s Go Stealing, in which he talks about “the guy I stole all my ideas from… he was a bit like me, but with much better teeth”. Straight Faced Tracy is a shambling stomp of a thing in which he’s grinning while singing, while The Wrong Thing is so catchy it should come with a health warning. They’d all snugly fit into Hefner’s early output, but with this country-tinged live arrangement they’re less edgy and angry than Hayman’s former band’s output. They and Hayman seem happier.

Little Heart Attacks provokes a singalong and Higgins Vs Reardon is only slightly short of becoming a hoedown at a campfire, but a quiet number referencing Peter Gabriel has the bar manager reminding the audience to SSHHHHHHHH! repeatedly. She’s Not For Me and Crocodile, by contrast, both keep the feel-good factor high.

In amongst the near-constant repartee with his audience, he informs us that he’d normally have a fiddle vs ukelele duel but, joined by Dave from support act The Wave Pictures, he steps out of the battle, instead becoming MC and dividing the audience in half to cheer on their respective duellists. The audience get carried away – and they’re still hollering for their champions as Hayman tries to launch into Art & Design. “Shut up, for fuck’s sake!” he says, “I’m trying to change the mood here!” Other performers would never get away with this. Hayman’s audience love it.

After the briefest of breaks he returns to remind us that he has a bluegrass band too. Along with three of his band he launches into this quite unexpected ending, followed only by the perfect winding-down of Hello Kitten. Afterwards Hayman heads straight to the merchandise stall, rather than back to the green room. His admirers cluster about him, nattering. He could hardly be less showy. Or better.