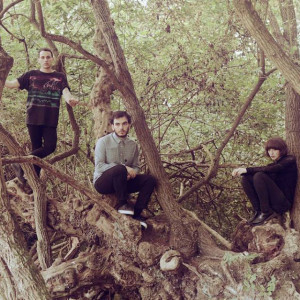 When bands reach a certain level and they’re thrust from the comfort of smaller gig venues and into vast theatres like tonight’s venue, they have two choices: to ignore the extra couple of thousand seats (and the fact that there are seats there at all) and try to replicate the “intimate” shows they’re used to; or to just go big. For the closing night of their post-album release tour – which is something of a home coming show – Daughter choose to go big. It’s a decision that they might come to regret.

It’s not surprising they decided to make a real show of things; tonight all three levels of the Shepherd’s Bush Empire have sold out, with close to 20 photographers are crammed into the photo pit. This is off the back of their debut album which, when it was released back in March, won many plaudits. Going out and playing a gentle set on a par with the shows they’ve been playing for the last couple of years was never really an option. But it was these gigs – along with their beautifully crafted, breathless record – that got them where they are today.

Visually it was a treat; they upped the ante with a light show that left those on the top balcony shielding their eyes and basking in heat. But musically they were cold; cranking up the volume for the sake of it, rushing through songs and losing that crucial sense of drama, swamping Elena Tonra’s distinctive delivery. They went a bit The xx on us. While their record positioned them as a warmer version of their almost mainstream counterparts – the sentiment is similar, but their songs have more depth – tonight there was a shift in reliance away from Tonra’s vocals and onto thudding drums and industrial sounding guitars.

Album favourites Human and Youth are rushed, like a child embarrassed to read in assembly at school. The crowd is clear about the songs they’re there for and greet the opening lines with cheers, which soon dissolve when the parts where the songs usually soar and hit hardest fail to materialise.

Frustratingly, there are moments when they offer a glimpse of what could’ve been. They strip back, letting Tonra take centre stage, stood under a spotlight, her band mates almost invisible in more ways than one. Lifeline, with its heartbreaking refrain “But I hate your guts, I want you so much”, is almost unbearable. Her voice is icy cool – like a bitter Beth Gibbons – and echoes through the theatre, for the first time sounding like the band who wooed us gracefully earlier this year. Likewise, Suffocate instantly silences the room.

If anything sums up Daughter’s failings tonight it’s their encore, their take on the summer’s mass-appeal anthem, Get Lucky by Daft Punk. Their attempts to twist it into their signature sound fall flat; it’s just a little bit try hard. They’re a band who really don’t need to try hard.