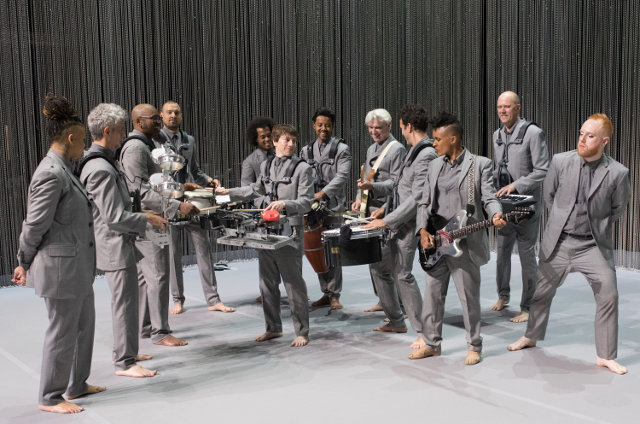 Of course, we’d heard in advance that tonight – the latest stop on David Byrne‘s American Utopia tour – might be A Bit Special. It was hard to miss all the tweets when the production was unveiled, and given all the gushing praise since, to remain ‘unspoiled’, we’d have had to do a music press equivalent of Bob and Terry’s efforts to avoid the football results on Whatever Happened to the Likely Lads?.

But, jaded and decidedly more than warm, we still feel a noticeable buzz on peering through the doors into the Apollo auditorium and catching our first glimpse of the set: a small table and chair in the middle of an otherwise empty stage, whose rear and wings are shrouded by metallic curtains. A grey-suited and barefooted Byrne soon appears at the table with a prop brain, then strolls around during Here, illustrating the lyrics by pointing at its various parts, as if delivering a Royal Institution Christmas Lecture to a visiting company of aliens.

It’s not your typical opening number. But as the rest of the band appear, similarly suited and unshod, their instruments hung from harnesses around their necks and wirelessly amplified, it’s quickly obvious that this isn’t your typical gig. 34 years on from Stop Making Sense, where Byrne and Jonathan Demme dramatically reimagined the live show, the band slowly coming together piece by piece with each song, the …Utopia concept takes a different route with a similar problem: What if the instruments were all there from the start, it posits, but all the other bits of the ‘rock show’ – amps and leads, risers and stands – were stripped away?

It’s the kind of minimalist staging we’ve seen in the theatre – Sally Jacobs’ white box design for Peter Brook’s A Midsummer Night’s Dream, famously – more than in a live music context, and it works brilliantly. Rather than adding a layer of artifice which might detract, the painstaking choreography, by Byrne’s regular collaborator Annie-B Parson, draws our attention to each member of Byrne’s eleven-piece band and the part they play. (And, as we’re assured, every note is played live, even as they weave and whirl, crouch and conga.)

In particular, percussion is usually shared by at least five or six players carrying different parts of deconstructed drumkits, and there’s barely a moment in the set which isn’t driven by at least one or two clattering grooves. The production certainly enhances the weaker material – I Dance Like This, slightly jarring on the uneven …Utopia, and I Should Watch TV, from Byrne’s frustratingly not-brilliant collaboration with the up-to-then otherwise unimpeachable St Vincent, suddenly make sense in this context. But it’s also a fitting salute to his former bandmates – in Tina Weymouth and Chris Frantz, one of the very greatest of rhythm sections, not always given their due by Byrne – that it should take this many players to do justice to the Talking Heads songs he performs. And every one is a highlight.

From 1979’s Fear Of Music, there’s I Zimbra, where the strange, polyrhythmic grooves which grew into Remain In Light and Speaking In Tongues first spread their roots. Here, flawless guitarist Angie Swan picks out Robert Fripp’s tricksy cross-rhythms under tumbling, tribal percussion. A warm, joyous This Must Be the Place (Naive Melody) has the audience singing along with every pitch-bend wobble of Karl Mansfield’s synth, while Blind, from the band’s final album Naked, never sounded better – a soulful, greasy funk – and looks stunning, with a dazzling footlight casting huge, Byrne-and-band-shaped shadow plays on the silvery drapes. And it makes a pretty bold statement to throw in a glorious Once In A Lifetime (captured by a sea of glowing smartphones) less than halfway through.

The main set is capped off by an incredible Burning Down The House – well and truly extinguishing the spectre of Tom Jones and The Cardigans’ version – which threatens to crumble this one around us, and there’s an encore of The Great Curve (with Byrne and Swan sharing Adrian Belew’s plunging, squealing guitar parts) that’s somehow even more frantically funky than the recorded version.

Noting that its message is sadly as relevant today as when it was released in 2015, Byrne and his band – by now almost all on percussion – finish with a forthright cover of Janelle Monáe’s Hell You Talmbout, an anthem of the Black Lives Matter movement. (“Eric Garner, say his name…/…Sandra Bland, say her name”.) Even when a show is as memorable as this, there are things we should never forget.

David Byrne played: Here, Lazy, I Zimbra, Slippery People, I Should Watch TV, Dog’s Mind, Everybody’s Coming to My House, This Must Be the Place (Naive Melody), Once in a Lifetime, Doing the Right Thing, Toe Jam, Born Under Punches (The Heat Goes On), I Dance Like This, Bullet, Every Day Is a Miracle, Like Humans Do, Blind, Burning Down the House Encore 1: Dancing Together, The Great Curve Encore 2: Hell You Talmbout