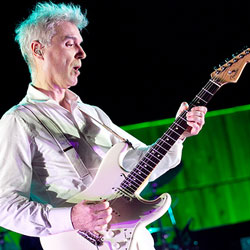 David Byrne was rather sly to bill his pair of Ether 09 headline gigs as ‘Songs Of David Byrne And Brian Eno’.

The men first famous for fronting Talking Heads and producing ambient music respectively released a second collaboration in 2008, Everything That Happens Will Happen Today. It was their first album together since 1981’s My Life In The Bush Of Ghosts.

Although Eno was to turn up for the second of these two gigs, he declined to grace the stage tonight. No matter. Byrne, kitted out in dazzling white that matched his hair, was joined by multi-talented instrumentalists-dancers-backing-vocalists, also head-to-toe in white, together with a pair of percussion/drum kits, and synths. Continuing the coordinated visual effect, even Byrne’s guitar was white, in stark contrast to the simple black stage.

“I’ll be your waiter. My name’s Dave,” he intones to laughter as the set cranks up and stays up for the next two hours. That sly billing turns out to be code for a veritable Best Of, and Byrne served notice that his best live shows were certainly not in the past. Recent collaborators, from Dirty Projectors to X-Press 2, already knew what we were to find out – that his music and his sounds have hugely influenced a diverse number of big-name acts. Hell, he’s even produced some of them.

Two songs in and the dancers are into a choreographed routine that captures and then releases Byrne as he stylishly plucks away at his wireless guitar. Between this and references to photos being on Flickr later, he declares himself still fascinated by technology and its use to music. Little wonder then that his creative partnership with tech-head Eno has endured.

But this show proves to be far more than a silver fox pointing out his back catalogue. A near-perfect melding of sound and vision, he uses props, the dancers and his own movements – definite and never over-egged – in synchronicity with the music. In some hands it would be horribly pretentious, but Byrne makes it look not only lots of fun but effortless too. It doubtless takes a lot of effort to make movement look so effortless.

As he gets in to the first Eno collaboration, there’s a variation on a theme: “I’ll be your sampler tonight.” One Fine Day, from the new album, is laid back and warming like whisky and an open fire. But it’s the early stuff, with the sort of funky disco guitar that the DFA (especially through LCD Soundsystem, Hot Chip and fellow Ether 09 headliner The Juan Maclean) have revitalised lately that dominates song after song with infectious, unstoppable grooves.

Walking The Line is nothing short of funktastic, and the audience is on its feet for chorus after chorus as Byrne liberally wiggles his hips before twiddling his guitar: “I’m just checkin’ my email,” he deadpans as chairs are wheeled on and Byrne and his dancers proceed to dance and spin about on them.

Still Waiting, The Beat Goes On and Days Go By follow in quick succession till the first encore. He’s soon back – clocks had only just struck 9pm – for more, and the audience hasn’t sat down. A second encore is taken to deafening whoops as he returns for Burning Down The House – in a tutu. The title track of the new Byrne/Eno album winds down a set sonically structured as a DJ might, choreographed as a musical. When you have this much vision, it’s no wonder your influence endures.