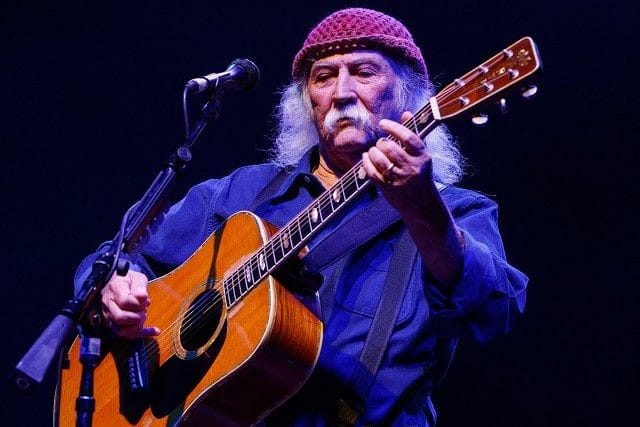 About to release his fourth album in five years, David Crosby is, at the age of 77, enjoying something of a late career hot streak. Always a natural collaborator (even when these processes eventually lead to recurring acrimony), Crosby has moved in intriguing new directions through his associations with musicians versed in jazz, groove music and intricate songcraft, among them the excellent New York singer-songwriter Becca Stevens and Michael League of popular groove band Snarky Puppy. The resulting recordings sometimes bring to mind Steely Dan, although they also draw from more familiar California territory. Neither artist is present at tonight’s show, and Crosby’s mind is clearly happy to wander through all facets of his lengthy and varied career. The show is divided into two sets of roughly fifty minutes each, and Crosby’s voice, a few minor glitches aside, appears to be holding up very well indeed. It’s a voice that still radiates conversational, welcoming warmth in spite of Crosby’s occasionally irascible online persona and righteous political anger. The first set focuses exclusively on selections from Crosby’s extensive back catalogue, whilst the second makes very occasional forays into fresher territory.

Given the depth and quality of his recent material, a little more of it would actually have been welcome, especially given the affecting loveliness of his duet with singer and keyboardist Michelle Willis on the title track from last year’s Sky Trails in the second set. There is a second duet with Willis, which could hardly be more stylistically different, a wildly entertaining and memorable bluesy rocker called Janet, written and lead by Willis. Hopefully this features on the forthcoming album Here If You Listen, billed as a collaboration with Willis, Becca Stevens and Michael League.

Whereas his occasional musical colleagues Graham Nash and Neil Young often favoured a homespun directness and melodic clarity, Crosby has always been more interested in rich harmony and textural contrasts. In his own words tonight, “you must realise that I never wrote the hits. I wrote all the weird stuff.” On guitar, he tends to play a delicate, textural role, leaving much of the exuberance and virtuosity to the excellent lead guitarist Jeff Pevar. One highlight of the first set is At The Edge, originally recorded by Crosby’s band CPR. It’s a song that appears to journey through a wide range of moods and sensations and carries with it a genuine sense of mystery. A strange harmony at the end seems to take Crosby by surprise. “I’ll get you for that!” he directs over at his son and bandleader James Raymond. “I always thought by the time I had my own band, I’d be in command. But it’s a constant mutiny!” In seriousness, Raymond surely deserves a great deal of credit for how meticulous and lushly orchestrated this band sounds – particularly the enveloping vocal harmonies. Crosby speaks enthusiastically about all his band members, particularly drummer Steve DiStanislao, with whom he has a longstanding working relationship. DiStanislao’s ability to vary dynamics and texture with immediate effect is particularly impressive.

The back end of the first set highlights some of Crosby’s most enduring songs – a delicately twisting and ornate Guinevere and a meaty, committed take on Long Time Gone. Both suggest that Crosby still finds enjoyment and novelty in this material. Even better is a turbulent, sometimes even apocalyptic sounding Deja Vu, that veers between confrontation and melancholy with grace and conviction. All band members get a solo here, and it’s refreshing to be at an ostensible rock show where Mai Leisz’s beautifully melodic fretless bass improvisation is greeted with genuine enthusiasm.

The second set opens with mesmerising subtlety with a take on The Lee Shore (of course a substantial highlight of the classic Crosby, Still, Nash and Young live album 4 Way Street). It’s a reminder that Crosby’s melodies are intricate and richly imagined – his songs seem to move and flow with graceful poise. Particularly superb tonight is Homeward Through The Haze, a song introduced as being of great personal importance for Crosby, perhaps offering a route out of his most severe period of addiction. Later, there is a valedictory home straight and encore that again highlights the most enduring corners of his career. The heavy backbeat makes Eight Miles High somewhat more lumbering and earthbound than The Byrds’ astral take, but it would no doubt be foolish to attempt any kind of recreation of that extraordinary sound. Wooden Ships offers an appropriately compelling closer, whilst the powerful, soaring encore performances of Almost Cut My Hair and Ohio find Crosby pushing the dynamic and range of his voice to the edge, as well as finding new depth in material that could be considered very much of its time. It is remarkable and brilliant enough that Crosby is still out there working, even more that he has found such empathetic musicians and finds ways to tease new magic from this distinctive and idiosyncratic catalogue.