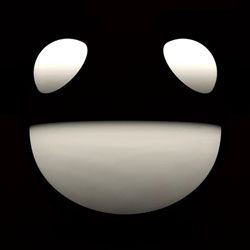 Arriving at Earls Court, there are constant reminders that Deadmau5 is without doubt the best-branded act in dance music today. Mau5 branding is everywhere, from posters to t-shirts to fluorescent mouse ears which are adorning hundreds of ravers’ heads. A few fans have even made their own full-sized replica Deadmau5 masks, showing the fervour created by Canadian producer Joel Zimmerman, who has managed to make himself possibly the only new stadium dance act to emerge over the past decade.

Following Magnetic Man‘s pop dubstep set and an uninspiring set from Zane Lowe (“Oggy, oggy, oggy!” he shouts over Darude‘s Sandstorm) a sheeted ghost walks across the stage and up to the control deck. The decibels are upped massively from the support slot levels and kick drums pound ribcages as a Super Mario featuring Deadmau5 video game features on screen.

The famous mouse mask is on as filtered melodies sear through the air to be joined by huge kick-heavy drops. It’s a formula he’s been criticised for – all the man needs is an arpeggiated melody and he’s got another hit – but it works and the amassed Mau5 fans love it.

There are prolonged moments when Zimmerman relies on little more than a kick drum, which makes for uninspiring listening at times. But thankfully he manages to dig out a couple of his amazing melodies in the nick of time while continuing to fry retinas with his searing light show. That includes the lights on his ultra-high-tech, ber-expensive mask which mutate and flash random shapes and expressions. He even flashes the crowd a smile at one point. Literally. Criticisms of being a one-dimensional artist are then put to bed by the detailed and highly creative vocal number, Raise Your Weapon, which twists and turns its way from a piano ballad into an anthemic dubstep monster.

The masked Mau5 then runs through the crowd on a suspended walkway to play the next track on a giant transparent touchscreen sequencer. It makes for quite a sight as he seemingly controls every element of the track through this oversized translucent iPad. He then returns to the stage to be joined by Sofia Toufa, the vocalist name-checked on Sofi Needs A Ladder, which she launches into with her attitude-fuelled raps. Zimmerman even obliges mid-song by handing her a stepladder.

The entertainment value is upheld as the LEDs on the mask contort to form an evil face that does a Thriller-style cackle to introduce Ghosts ‘n Stuff before the ravey floor-pleaser ends with what looks like a Windows crash. Of course it’s just a joke – the cheeky mouse!

There are no doubt a hundred back-up plans to prevent such a technical fault as the Canadian’s mask then mouths along to Sometimes Things Get, Whatever, before the control pod he stands in glows with giant red lips that sing the words to hit single, I Remember. It’s all visually impressive and musically it proves hypnotic as well, especially when epic crowd favourites like Strobe uplift and batter by equal measure.

Having removed his high-tech head and waved goodbye to the crowd, Zimmerman responds to the cries for more with a doom-laden track featuring grinding synths and mellow chords and an acidic banger to finally bring the set to a close.

Tonight’s proceedings actually made the ugly, soulless car park that is Earls Court seem like it was being used for its true purpose; as a dirty underground rave, or a slightly grubby commercial one at least. As for Deadmau5, he proved himself musically by combining elements of rap-led dubstep, trance and electronica and, in spite of being too kick-happy and stepping into some inane Afrojack-styled ‘screech-dance’ at times, managed to provide an audiovisual feast for the senses. It was a show guaranteed to increase both album and merchandise sales. Merry Christmau5!