Death From Above 1979 @ Brixton Academy, London 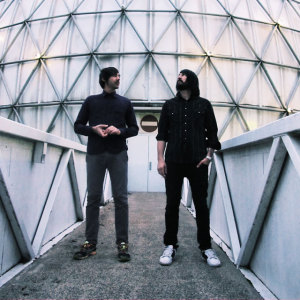 No one holds their bass like Jesse Keeler. Forget the bass face, his is a full bass body, thrusting at you with the vigorous vitality of a man with a four string mission. Head back, back arched, hips pushing his instrument towards the world with an expression which says “Level 42?! Level 4-fucking-2?! I’m level one hundred and forty fucking two!”

It is quite something to behold. The sound he makes too, it’s enough to make you forget an entire history of Les Paul sporting idols bearing false chords. Jesse we salute you.

If there’s a note of triumph in that man’s hips, it’s well founded. Death From Above 1979’s reunion has now stuck past the point where you can argue that the crowds and the excitement are simply being drawn in out of nostalgia. This feeling is reinforced by the fact they’ve also managed to produce new material – last year’s excellent The Physical World.

So on they stride to the stage in Brixton, a certain confidence in their step. Keeler in black and his drumming, screaming partner in ear mashing one-upmanship Sebastien Grainger, in white. Nothing much has changed in terms of stage setup. It is minimal, just them and a cut out of their pretty much iconic, elephant-trunk logo. They’ve also not really altered what their live act entails.

Noise. Cacophony. Frenetic, splenetic, viciousness. Turn It Out greets you first. Well, greets in the way a Glasgow kiss greets you. It’s a barrage. A riot. A hugely exciting smash in the chops, with both Keeler and Grainger pummelling away on. Right On, Frankenstein is equally glorious, thrashy and sludgly downtuned, while Virgins sledgehammers the point home.

It’s as brutal an opening as you might expect. But as the show progresses, there’s just something not quite perfect tonight. There’s certainly a lack of clarity in that immense wall of sound, more often than you’d like Keeler’s bass (or keyboard when he decamps there) is hard to distinguish. Cheap Talk falls off the tightrope between noise and craft which DFA 1979 tread: out of time and out of control. White Is Red, always the most likely to suffer from a lack of subtlety, is nowhere near as appealing as on record and Dead Womb is muddy and disappointing.

The feeling of something being off kilter is reinforced as they fluff the start to Always On. The stoic look on Keeler’s face may remain pretty much beatifically intact, but there’s a certain frustration (on both sides of the barrier) with the band not quite achieving their objective to batter you into submission as frequently as they’d like.

Although, they still manage it more than most. The bass of Gemini squeals like someone explaining the concept of crackling to a pig. The chu-chu-chugging tension raising build that they employ on Little Girl both shows while they’ve not changed much about their setup, they’re now well versed in the gentle art of frenzy whipping, while the creaking feedback of Romantic Rights is accompanied by sufficient strobes to induce a grand-mal seizure in a concrete pillar.