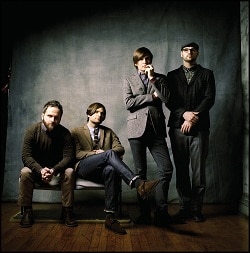 Death Cab For Cutie have released a new album this year but judging from several factors tonight – the intensity of their performance, what they play, the fact that it’s arguably not their finest work etc. – you wouldn’t have known. Then again, if you’re a band like them who, in the UK at least, have a cult audience big enough to see them play venues like the Hammersmith Apollo you might argue that they have the license to play whatever they damn well want to. Anyone going to this gig on the strength of Codes and Keys might have left feeling a little disappointed.

However, there is no reason at all to leave disappointed. If you find yourself in an argument where the topic is whether a band is likely to be at their best in big venues when they’re not quite a firm fixture of mainstream music then this evening would be a good example to bring up in support of this statement. It’s similar in a way to what Muse achieved before Supermassive Black Hole turned them into the house band for the Twilight films or Kings Of Leon humbly playing solid arena shows before they took a drastic turn for the worse – not requiring a huge amount of spectacle and awe to make a paying audience happy. It’s very hard to see Death Cab For Cutie making an arena-ready record soon but why would they? They’re more than happy to continue this path that they’ve made for themselves.

That’s good news for everyone because they managed to get through twenty-six songs in two hours and fifteen minutes of stage time. It’s an evening of value-for-money substance over style. Lighting is fairly simplistic, there’s no fancy visuals or tricks and this enables them to explore all corners of their discography. It also shines the spotlight on the band and, in particular, Ben Gibbard who is a live wire of activity with little quirks such as constantly whipping the guitar lead out of his way or adjusting his microphone. It’s these mannerisms that make you wonder whether or not Thom Yorke has taken his place right down to the long hair and short-sleeved shirt.

As for the tunes themselves, all played without fault and with more urgency than on record, it’s hard to top Transatlanticism, which sees the crowd hushed in silence as it builds from eerie piano ballad to a towering epic. It’s the most powerful song of the evening, which is quite some going when their set is littered with strong moments. Whether it’s the gorgeous I Will Follow You Into The Dark, the detailed lyricism of Title And Registration, the harmonies of We Looked Like Giants or the hooky guitars of You Are A Tourist it’s an extremely consistent set of songs. It’s probably not surprising that cuts from Plans and Transatlanticism make up the lion’s share but it’s encouraging when older and much-loved records like The Photo Album are still widely acknowledged.

It’s rare to leave a show such as this with a feeling of genuine contentment but that’s what Death Cab for Cutie managed to achieve. There were no fireworks nor any spectacle – just a lot of truly brilliant songs.

Death Cab for Cutie played: Bend To Squares, Crooked Teeth, Why You’d Want To Live Here, Doors Unlocked And Open, Long Division, Grapevine Fires, Codes And Keys, What Sarah Said, I Will Possess Your Heart, A Lack Of Color, Title And Registration, You Are A Tourist, The New Year, Company Calls, Company Calls Epilogue, Brothers On A Hotel Bed, Soul Meets Body, A Movie Script Ending, We Looked Like Giants, Marching Bands Of Manhattan. Encore: I Will Follow You Into The Dark, Blacking Out The Friction, St. Peter’s Cathedral, Styrofoam Plates, Cath…, Transatlanticism.