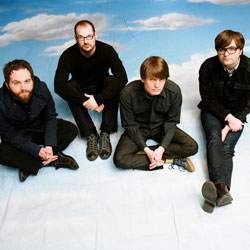 It’s a mark of both their confidence in their own ability and an awareness of their situation that ensured Death Cab For Cutie’s appearance at the iTunes Festival (aka a month of nightly gigs at Camden’s KOKO) consisted of the set it did.

The four-piece managed just the right combination of new songs from their recent US Number 1 album Narrow Stairs and hits taken from across their decade-long career.

From the moment Ben Gibbard emerged, dressed in sleek black shirt and skinny jeans, having grown his hair flatteringly longer and looking trim and thoroughly de-geeked for the occasion, the band’s TV theme- and radio-friendly indie was well received by an audience which, while not always appearing entirely familiar with even some of the better known tunes, seemed to enjoy what they were being given.

The bane of the corporate ‘festival’ rounds is that a good proportion of the audience may well have won their tickets in competitions or simply picked a run of nights at random from what’s available. But here lies the sense in giving the punters a complete overview of your wares rather than playing the latest offering in its entirely. After all, if they like what they hear they may buy your entire back catalogue as well.

As a result, the set list jumped around – predominantly between the bands’ more recent albums; 2005’s Plans and 2003’s Transatlanticism in particular – including old favourites such as Passenger Seat, The New Year, Souls Meets Body and The Sound Of Settling. While the sound was a times a little weak, the band’s enthusiasm carried them through.

Bassist Nick Harmer was so into his performance that he spent most of the evening forgetting which way to face but a superbly bassy and indulgently long intro to the sublime I Will Possess Your Heart redeemed him. One of the highlights of the new album at eight minutes and thirty five seconds, it was also by far the best track performed tonight. They saved current single Cath for the encore.

With it long since being given that the band aren’t really going home when they say “this is the last one tonight” at the end of the main set, encores are increasingly becoming the place for keeping the best til last. Tonight is no exception. Gibbard initially comes out alone for an acoustic rendition of I Will Follow You Into The Dark that sounds even more striped down than usual, after which he is joined by the rest of the band for Cath and Tiny Vessels, before finishing on an emotive and passionate run-through of Transatlanticism.

Whether it’s a good idea to leave this crowd without A Lack of Color (or ‘that one from The OC‘ as they’d probably know it) is questionable and possibly the only mistake of the night, but full marks to them for having the guts to discard it. As tonight’s audience will now be more than aware, they have plenty more to offer.