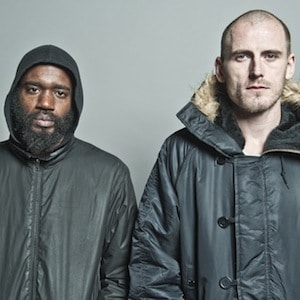 Death Grips know all about the power of gestures. Just ask their ex-record label. Although the subsequent dropping curtailed the debate over whether their decision to leak their third album (No Love Deep Web) was a rigid stance from a band staying true to their ideals, or a fairly blatant attempt to stir up controversy, it certainly demanded attention.

Tonight hinged on a gesture. A single, non musical act that skewed your view, and not for the better. During the last song of their set Miss Red, who had performed earlier with The Bug, got on stage and started dancing. Initially, MC Ride appeared to notice her and not care. But then something changed. Ride turned, viciously shoved Red off stage and continued. And you think, yeah, we know you’re uncompromising. We know you’re nihilistic. But that just makes you look like a bit of a dick.

Up until that point the violence had been all musical. It was a barrage, dark, grim and relentless. Zach Hill’s frankly astonishing drum attack, loose-limbed, fluid and extraordinarily complex and MC Ride doing his maniacal preacher thing. Backlit by fiery lights, he resembles a deranged callisthenics instructor giving a bums, tums and thighs class in the ninth circle of hell. Although, should he actually be the devils fitness instructor, he is a magnificent advertisement for the successfulness of his program.

Sometimes it seemed to break down into chaos. With just the two of them here, the samplers and keyboards normally handled by Andy Morin replaced with a backing track, there are times when Ride just seems to be ranting with all the lucidity of a drunk tramp berating pigeons. The beats scatter and ricochet off every surface, rattling like a pebble in an oil drum. Then it all reassembles into something which a crowd can bounce along with.

When it’s good – Guillotine, that looping refrain (“It goes it goes it goes it goes…”) burrowing in, the frantic desperation of Spread Eagle Across The Block and an insane I’ve Seen Footage – it is endlessly exciting. Given a lot of it is pre-recorded, it’s surprising how on the verge of collapse it sounds and that proximity to destruction gives it an edgy feeling of drama. It’s the thrill of crossing the rope-bridge with the fraying cables and missing planks. Of rubbing your head with BBQ sauce and placing it in the lion’s mouth. Of flying Aeroflot during a free vodka festival.

Then push comes to shove and the defining image of the night is cast. And you leave feeling somewhat different than you would have done. Objectively, its hard not to be impressed by the visceral energy Death Grips display. Subjectively, there’s a grim, unpleasant taste in your mouth which is really hard to shift.