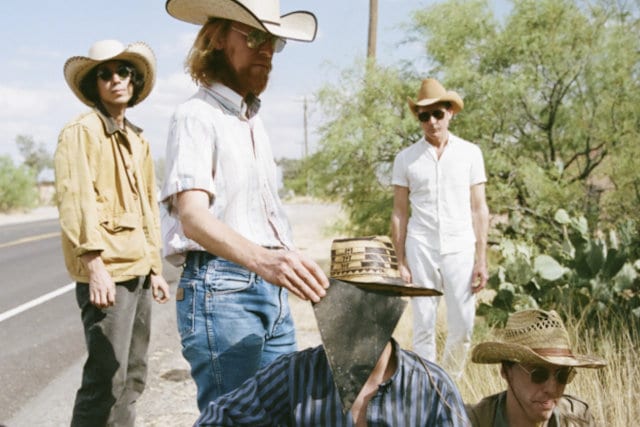 Deerhunter and Cate Le Bon have had a lot of fun together over the past couple of years. Le Bon spent the summer of last year with the band in Marfa, Texas, as part of the town’s Marfa Myths summer festival, where two artists are invited to spend the time collaborating as artists-in-residence. The results of that pairing are still bearing fruit: Le Bon produced Deerhunter’s latest career-defining LP, Why Hasn’t Everything Already Disappeared? and used the solitary moments of that summer to help inspire her own career-peak album Reward; and we’ve recently seen the release of Myths 004, a four-track collaborative EP that sums up the artists’ time together (although it’s only credited to Le Bon and Deerhunter leader Bradford Cox.)

With all of this in mind, they decided to keep the collaboration going for a few months more by touring across the United Kingdom together, playing a run of 10 shows in modest-sized venues approximately double the capacity of the venues Cate was playing on her own tour in August. Thursday night in Birmingham was the final night, and it showed, in many glorious ways.

Le Bon and her five band members spent the entire, hour-long set cloaked in a deep red light – which is fitting when you consider who austere and stark her music has become. Reward, released earlier this year, is a frosty collection of creaking art-rock that evokes David Bowie‘s Low, Magazine’s first two records and John Cale‘s Island albums.

In a live setting, the largely joyless album takes on new life. The atmosphere of the album is still one of sooty, coal-black melancholia, but Le Bon and her excellent band pepper it with selections from its fizzier, jauntier predecessor, Crab Day, leading to a beautifully rich experience. If anything, Mother’s Mother’s Magazines (one of the darker selections from Reward) has its dank, squalid mood amplified by its place on the setlist, after Le Bon’s wackiest tune, Wonderful, which has always sounded like The Raincoats at the Radar Station.

Bradford Cox joined the band to perform What’s Not Mine (another selection from Crab Day), and close out the first part of the double-header, continuing a tradition that had been in place since the first date of the tour. The band then said their goodbyes and headed backstage.

About 10 minutes later, Cox re-emerged from behind the curtain and talked honestly and meaningfully about his respect for, and admiration of, Birmingham band Broadcast, and their late singer Trish Keenan. He said that he would like to dedicate the first song (Death In Midsummer), and indeed the whole show to her memory. He wished she was still around, he said, so that they could collaborate right now, on the stage, in Birmingham.

The band steamed through their recent set, which leans heavily on selections from their own magnum opus, Halcyon Digest, with the rest of the setlist drawn from their most recent album.

Only when it came time for them to depart did something strange happen. The band honoured an audience request for Rainwater Cassette Exchange rarity Disappearing Ink, before playing a further three songs – Cover Me (Slowly), Agoraphobia and a particularly momentous rendition of He Would Have Laughed, their fantastic tribute to the late Jay Reatard.

By the time the encore had finished, many of the crowd had left (the band played past the curfew, and the venue is located around 20 minutes from the central train station.) Those that stuck around until the end heard a powerful, emotionally-charged scene closer from a band desperate to make it a show that Keenan would have enjoyed. They succeeded, not only by honouring her legacy, but by producing their best UK show in years. This was Deerhunter refreshed, refocused and reborn – one can only hope the next album brings them back in this form.