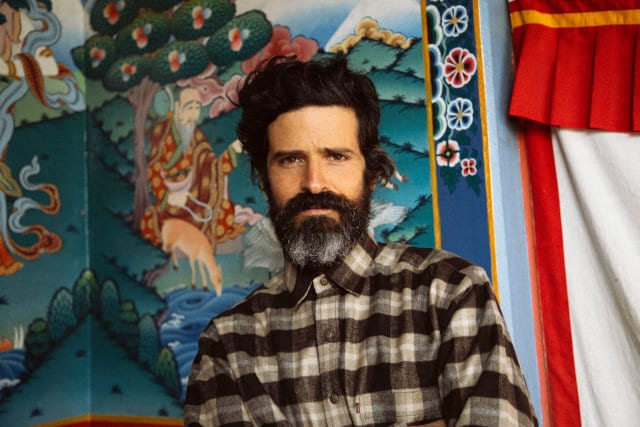 It’s rather fitting that this gig took place in a former church that’s now a community centre. The whole evening felt less like a formalised gig than a gathering of the nu-hippy underground in a celebration of shared community and fused spirituality.

Opening act Josephine Foster appeared dressed like a Haight-Ashbury flower child, her fluttering vocals and minimal guitar playing coming over as if she was the long lost love child of Joan Baez and Tiny Tim – folk music at its most whimsical and grating. The crowd were unmoved.

Espers arrived on stage to ripples of warm applause. The two lead singers, Meg Baird and Brooke Sietinsons, sat down on stools and picked up their guitars as the rest of the band arranged themselves behind a variety of charity shop instruments. Now stools and rock’n’roll are not normally the best of bedfellows. I feared that we maybe be in for death by acoustic torture. Thankfully my fears where misplaced.

The songs crackled with electricity. Swathes of cello, feedback and fuzz flashed through the mix. Bittersweet vocals swelled against the droning music, all fractured dreamscapes with dark ashen undertows. There are shades of Bert Jansch and Fairport Convention in Espers’ songs, but they are shot through with a desolate energy. This is folk retooled by the Velvet Underground via Spaceman Three.

The set built slowly until the closing track locked into tight krautrock rhythm, carrying the crowd away on a blissed out groove and placing all thoughts of Big Brother evictions firmly out of minds.

By the time the elfin figure of Devendra Banhart stumbled onto the stage the crowd where well oiled and expectant. The set that Devendra and his band delivered was a revelation. On record the songs are fragile, acid folk tinged and rather slight. With the backing of a full band they are transformed into a full-on country rock assault. The beards, long hair and frankly horrendous waistcoats make it look like 1972 on stage. But the vocal harmonies and water tight melodies are all Cosby Nash Stills and Young – charming and brim full of warmth.

Songs old and new were aired. This Beard Is For Siobhan, At The Hop and Good Red Road were all improved by the more robust treatment they received. It’s no great surprise with someone as prolific as Devendra Banhart that we are also treated to a wealth of new material from upcoming album Cripple Crow. His performance oozed charm and charisma, and he conducted the crowd and his band with ease.

Towards the end of his set Devendra stopped proceedings and asked if anyone in the crowd wrote their own songs. A few shy hands went up before he picked out a young woman named Annie. She strode on stage and Devendra give her his guitar to play.. The band disappeared into the wings, leaving Annie stage front and alone. She proceeds to rip through a song titled The Back of My Head. It’s a coiled and smouldering blend of PJ Harvey and The Duke Spirit – a clipped and festering blues delivered with intensity that belied that this may have been Annie’s first ever performance in front of crowd. Hopefully for her there may have been some A&R people in the crowd – she deserves a crack at this music lark.

After the stoppage to allow Annie her chance to shine the band launched into an effortless and endearing cover of Lauryn Hill‘s Doo Wop (That Thing). Banhart is a sprite on stage, smiling broadly and dancing like Rumpelstiltskin on ecstasy. The gig ended with an invitation for the crowd to join the band on stage. After an initial period of trepidation the stage was soon a mass of heaving young hippies frugging away and singing their hearts out.

On the evidence of this gig, Devendra Banhart, should he so choose, can become a huge star. Welcome the crown prince of the nymph underworld.