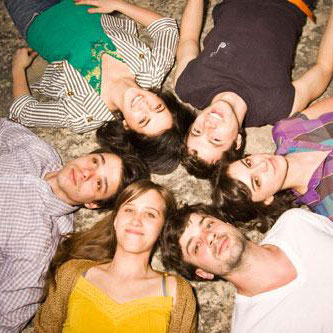 Tonight’s support act are Callers, a Brooklyn duo (expanded to a four-piece for live performance) who make music that alternately recalls the autumnal glow of Beach House, the stateliness of Low and, most regularly, the primal, howling qualities of Wye Oak. Crop-haired, bespectacled Ryan Seaton (think a thinner Michael Douglas in Falling Down) sings the opening number, but after that his band-mate Sara Lucas’s voice dominates. And what a voice she has; like a cross between Joni Mitchell and, yes, Wye Oak’s Jean Wasner, it comes across as clear as pure chilled spring water – certainly a lot clearer than the band’s music, which gets rather lost in the cavernous sound of a large, still-filling venue.

The sound also does no favours for Callers’ songs; the hooks that might be readily apparent on record (their third album, Reviver, has just come out) tend to evaporate upon escape from the amps. Nevertheless, they get an appreciative response from the expectedly open-minded crowd.

Those not already familiar with their formidable live reputation might have feared that Dirty Projectors‘ music would similarly suffer within the dome-like environs of the Roundhouse. After all, this is a band whose music flits between stoner-rock, sunny folk, Afrobeat and R&B – occasionally within the same song. A Dirty Projectors track performed live and badly could prove an unlistenable mess. Fortunately there are few tighter bands on the indie rock scene; it’s claimed that, in their early days, Dirty Projectors would spend hours on end in the rehearsal room, practicing to the endless tick-tocking of a metronome. If that’s true then all the repetitive toiling has paid off.

That’s not to say that Dirty Projectors’ music is dry or overly-intellectual. The genius of Head Projector Dave Longstreth lies in his ability to make music that’s simultaneously meticulous and messy; cerebral and playful. Although Longstreth is the main musical force behind Dirty Projectors, his bandmate and romantic partner Amber Coffman steals the show tonight. Whether performing hugely complex rhythm guitar parts with the nonchalance of someone pulling a loose thread from a jumper, or shimmying round the stage like an R&B diva during elliptical funk jam The Socialites, she oozes coolness. On Stillness Is The Move, she harnesses the spirit of the late Aaliyah before emitting an awesome upper register that brings to mind Mariah Carey. These are not things you would get from a regular rock concert.

Respect is also due to the band’s other two singers, Haley Dekle and Olga Bell, who add to the tight, warm and occasionally bracing harmonies that are so fundamental to songs like Gun Has No Trigger (which, in a fairer and more daring world, would have been the new Bond movie soundtrack, and also to the bassist and drummer who are tasked with mapping out rhythms that almost always opt for the path-less-trodden.

In a set dominated by their two most recent albums, 2009’s Bitte Orca and this year’s excellent Swing Lo Magellan, it’s a shame they couldn’t find room for anything from 2007’s breakthrough Rise Above. But that is to quibble – Dirty Projectors are among the best bands in the world right now and it’s a privilege and a pleasure to see them.