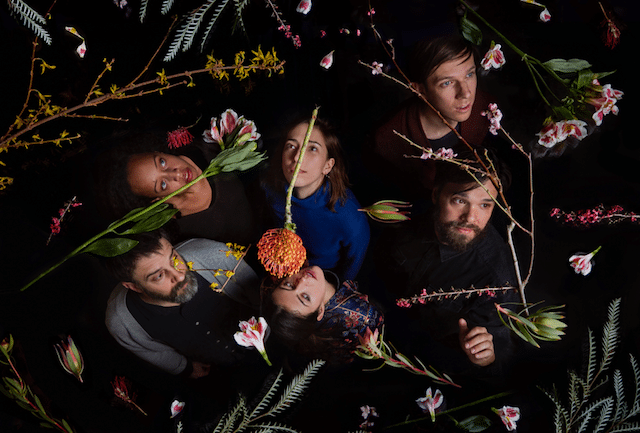 The heatwave, it would seem, is back with a vengeance. Or at least it is in this underground corner of Shoreditch, in this near-capacity, windowless Victorian coalstore. (Who knew?)

And while the air starts to hang heavy with evaporating perspiration, the between-bands playlist is doing a pretty good job of enhancing/exacerbating – it’s a matter of opinion – the super-summertime-vibe with a selection of light pop-reggae. Red Red Wine, Pass The Dutchie, that kind of thing. But only when it algorithmically plumps for Inner Circle’s 1993 number 3 hit Sweat (A La La La La Long) is the biscuit well and truly taken. Or, y’know, melted.

Why put ourselves through this? ‘This’ being either the excruciating heat or soundtrack – again, it’s a matter of opinion? It’s the first time Dirty Projectors have toured the UK since 2012, frontman/lynchpin Dave Longstreth’s first date in London since that year’s sold-out Roundhouse show, since cancelling an appearance at David Byrne’s 2015 Meltdown. Crucially, it’s also the first since the departures of Angel Deradoorian and Amber Coffman, whose tightly woven, acrobatic vocals had been such a huge part of the band’s sound.

The band’s extended absence may well have been largely due to Longstreth and Coffman’s breakup, and particularly to the decision not to tour the band’s self-titled 2017 album, an often painful exercise in musical scab-picking, with a more skeletal and necessarily solitary sound than we’d been used to hearing. But last month’s Lamp Lit Prose presented a Longstreth reborn, and from the outset tonight the sense of renewal and joy is palpable, even through the haze.

Opening, I Found It In U has Longstreth and newcomer Maia Friedman’s guitars locked together in twistedly Thin Lizzy-ish harmony; Break-Thru’s lyrics flip audaciously from clever (“She is so dreamy / That she got features on Fellini) to clever-clever (“Deadpan, unimpressed / Archimedes Palimpsest”) and back; and the soulful What Is the Time gives a gorgeous display of layered harmonies from Friedman and two other newcomers, Felicia Douglass on percussion and keys and Kristin Slipp, also on keys.

Drawn mostly from Lamp Lit Prose, it’s a glorious set, showcasing all the kinds of quirks and idiosyncrasies – the casually dispensed polyrhythmic complexities, the high-capoed, West-Africa-via-Talking-Heads guitar lines (Friedman and Longstreth’s meticulous duelling on Bitte Orca standout No Intention; Break-Thru’s highlife arpeggios), the dizzying vocal arrangements (Beautiful Mother, from Björk collaboration Mount Wittenberg Orca, leaves most of us speechless), the half-remembered reimagining of Black Flag songs – that make Dirty Projectors either “inventive and replayable and plain old fun” (Pitchfork) or “half-baked hipster garbage” (The Irish Times). Your mileage, as they say, may vary.