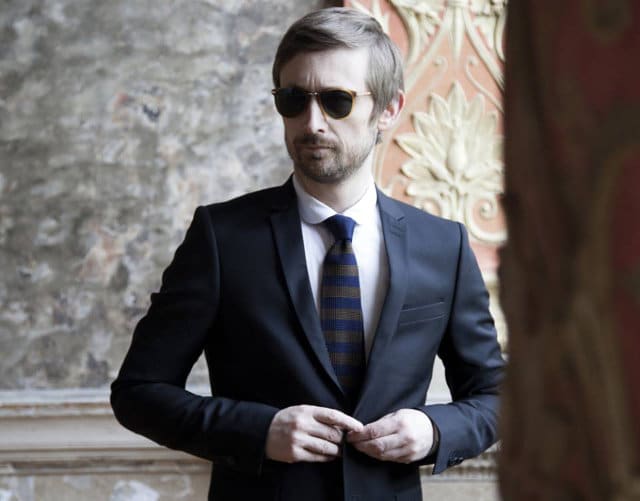 He strides manfully onstage with epauletted jacket, breeches, boots and Bicorne Hat. The current visual schtick for Neil Hannon is 18th century admiral and, having forked out for more than a cheap ebay party outfit, he’s going to make the most of it, goddammit. Launching into Sweden, the most hilariously pompous of all The Divine Comedy‘s extensive back catalogue, it’s clear Hannon tonight is here to gleefully tickle a few fancies. The band (half-heartedly costumed in polyester pirate knock-offs) do a valiant job of trying to fill out the big orchestral sound of the song on record. However, considering this is three well-attended nights at the London Palladium, you know, an orchestra might be nice. *Cough… sense of occasion… cough*

Staying (mostly) in character, we then get a crisp run through of the most European confections from The Divine Comedy cake trolley, including a full four songs in a row with European military themes. You simply can’t dress up as Napoleon without singing the French-Revolution-as-metaphor-for-bitchy-breakup-song The Frog Princess, so he does. Recent single Catherine The Great sounds like it could be great live, but really wants filling out with some brass (again, that orchestra). As for Napoleon Complex, well let’s just say that it serves as a better inspiration for fancy dress than it does a song.

To The Rescue seems to be fast becoming the most memorable song from recent album Foreverland. It takes a basic Gainsbourgian template and piles on layer upon layer of swoon, avoiding some of the stodginess that can creep in when Hannon is in a phase of writing songs about his domestic life. We might not be getting an orchestra tonight, but at least a man comes out towards the end of the song and toots on a cornet.

After an interlude where the band do their best to approximate the big orchestral arrangement at the end of The Certainty Of Chance (OK, enough about missing orchestras now), it’s time for Hannon to return in A NEW COSTUME. A Mr Benn for the twenty-tens, this bowler hatted umbrella-toting persona is a hangover from last time on the merry-go-round, 2010’s Bang Goes The Knighthood. The sharp political satire from those albums of The Complete Banker and the title track appears to have barely aged a day. Plus, that umbrella is damn good for poking at things. Politics out of the way, it’s a romp home through a swathe of greatest hits towards National Express, which gets the 40-something middle class audience pumped like the Last Night Of The Proms.

Speaking of middle-classedness, often it’s very unclear if Hannon is mocking the middle classes in his songs, celebrating them, or both, as with cheery encore Assume The Perpendicular. Judging by some of the braying going on in the Upper Circle tonight, these aspects may now be rather lost on sections of the audience, who are not the bright young devotees of old (we are forced back down into our seats by security when nobody seems to know Promenade classic A Drinking Song). Still, Tonight We Fly, as ever, is guaranteed to send everyone soaring off into the February night starry-eyed and breathless. Some good things, at least, are eternal.