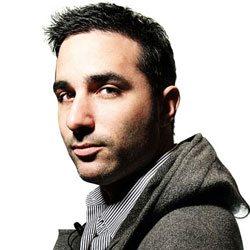 London’s Roundhouse seems to have become something of a hotbed for groundbreaking audiovisual sets of late. The Chemical Brothers chose to showcase their Further album/gig/DVD experiment there and, more recently, Chris Cunningham caused sleepless nights with his horrifically twisted sights and sounds on the same stage, only to be topped by Amon Tobin’s dumbfounding AV spectacular a few weeks later.

Tonight sees that burgeoning tradition continue with DJ Yoda, whose take on creating an audiovisual set is concerned more with creating laughs and making people dance than the technological bells and whistles of Tobin, but is no less satisfying to watch, albeit for completely different reasons. Taking viral videos from YouTube and mixing them just as any other DJ would tracks, Yoda, AKA Duncan Beiny, has made a name for himself by creating dizzyingly madcap sets that showcase both his comedy timing and his skills as a master turntablist.

Tonight’s performance is another first for the Roundhouse, as DJ Yoda is joined by the Trans Siberian March Band, a joyful gaggle of brightly-dressed eccentrics. As House Of Pain’s Jump Around immediately gets the crowd whooping, the band then joins in on brass before taking over for a gypsy-style oompah-frenzy which Yoda scratches gleefully over the top of.

The main hook of Push It is then performed on trombones as Salt ‘N Pepa bounce around on the giant LED screens, the James Bond theme is turned into a eardrum perforating dubstep track and Eleanor Rigby receives a moombahton remix. While it could be dismissed out of hand as a bloke playing other people’s music and other people’s videos with a brass band playing over the top, that’s still two more things than the average DJ has in his armoury, plus, how many DJ sets make a crowd burst out laughing, repeatedly?

It’s not all about laughs either, DJ Yoda also mashes and melds tracks with a creative flair many lack: Dizzee Rascal’s Fix Up, Look Sharp is mixed expertly with The Specials’ Message To Rudy for instance, while Snoop Dogg meets live, Mexican-style trombone.

If there’s one criticism, it’s that, perhaps due to the band’s requirements, the set is less mixed from track to track with a fair amount of breaks in between. But when Katy B’s Katy On A Mission is succeeded on screen by Shaun The Sheep and friends dancing to a live Romany dance song, this is a mere detail.

The band then leaves the stage for Yoda to orchestrate the madness on his own, with highlights including Sesame Street muppets singing to the Beastie Boys’ Sure Shot, Peewee Herman dancing to electro and a breakbeat mix of Enya’s Orinoco Flow. All that’s left is for a run-through of dubstep, house and drum and bass accompanied by Rastamouse, Jeremy Kyle and Angry Birds, but not necessarily in that order.

The art of the DJ is arguably dead, so while some of his contemporaries find themselves replaced by more adept and punctual software packages, DJ Yoda raised the stakes firstly by mixing videos rather than just tracks and has now done so once again by getting a marching band on board. Entertaining from start to finish, this lesson in multitasking (to dance, to watch or to laugh?) was a first for DJ Yoda, another triumph for Soundcrash Music, who were also behind Amon Tobin’s show, and yet another feather in the Roundhouse’s pioneering AV cap.