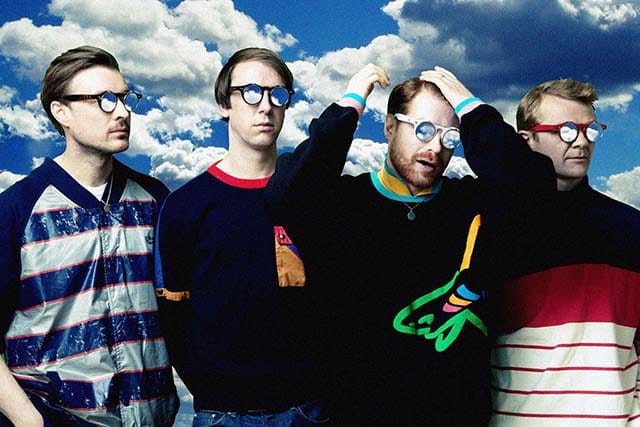 Deepest Rotherhithe was the location for the unveiling of London’s newest medium-sized venue on Friday night. Printworks started life as a printing press but was converted in 2017 to a nightclub with a focus on electronic music and DJs. Tonight saw Django Django play the first show in a new, 3,000 capacity space that will compete with the likes of Shepherd’s Bush Empire, the Forum and the Roundhouse to host bands in the capital.

The scale of the venue is apparent as soon as you enter; three levels to watch from and vast spaces for things like bars, food and lockers (the cloakroom equivalent). Its shape will be what makes it stand out from other venues – a long, thin space unlike anything in London (some concerns were later expressed about this layout but there was no evidence of this having a negative effect on the enjoyment of those stood towards the back of the venue).

Django Django’s mix of guitars, percussion and electronics offered a good early test for the new sound system. They open with the title track from the new album, its propulsive guitars allowing it to take flight, almost marking the venue like chemtrails mark the sky.

Second album Born Under Saturn may be the least imposing of their three albums but the two tracks they play early on fare well; the pronounced, elevated riffs of Shake And Tremble contrasting with the relative discretion of First Light. Tic Tac Toe breaks them up, a pacy four minute dash with soaring, erupting choruses and impeccable pop sensibilities. The exquisitely streamlined In Your Beat meanwhile is an early highlight, its electronically charged beats ricocheting around the venue in hedonistic fashion.

Waveforms shows how, despite a lot going on musically, their sliding, mantra-driven vocal melodies are never dislodged from the central position they occupy. The influence of The Beta Band is never too far away in their music and tonight is clearest in the psychedelic pop of Further (drummer David Maclean is the younger brother of The Beta Band’s John Maclean). The requests for greater audience engagement from frontman Vincent Neff suggest the early stages haven’t elicited the desired reaction but equally could just have been a reflection of the excitement felt by them playing their biggest UK show to date.

Surface To Air sees Self Esteem (Rebecca Taylor of Sheffield duo Slow Club) return to the stage – she had opened with her own set – but the synth pop doesn’t shine as bright as it could and the extended drumming at the end doesn’t hit home as powerfully as hoped. Sundial has shades of The Charlatans to it, with its lightness and bounce, yet also shows how the band draw from the past whilst disguising it well.

The end of the set sees them wheel out the hits; Skies Over Cairo’s lopsided, cleverly appropriated Arabic melody signalling a step change in audience reaction. Things truly take off when the infectious opening riff of Default rings out. Wor meanwhile suggests a supercharged version of The Coral and it’s followed by the scampering Life’s A Beach. The clean, delineated guitars of Storm and Silver Rays cap a successful show. With a string of US dates and European festival appearances ahead of Django Django and Printworks’ open diary just waiting to get filled up, it’s clearly an exciting time for both band and venue.