Do Nothing @ The Hope & Ruin, Brighton 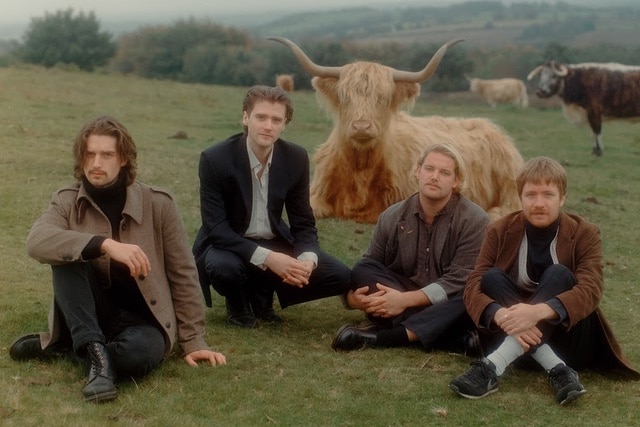 Do Nothing (Photo: Adrian Vitelleschi Cook)

“I got all dressed up for nothing,” he curses on Lebron James. Looking one part junior bank manager, in the requisite sloppily fitted pale grey suit and tousled locks, and one part snarling 21st century twitching curmudgeon, Do Nothing frontman Chris Bailey’s borderline aggressive stage persona is a world away from the droll indie misfit you’d perhaps come to expect given his band’s apathetic name. Choosing not to adopt some by now cliched slacker response to the world, the 12 or so numbers the group perform tonight seem like a marathon slog, emotionally for the bruised Nottingham poet and his, at times, uneasy colleagues to endure.

Often allowing themselves to be completely obscured by his all encompassing epistolary observations, as the group begin percolating the quivering new wave dissent that makes up the intro of Uber Alles, their frontman is nowhere to be seen and mild expressions of panic begin to appear on the babyish faces of drummer Andy Harrison, bassist Charlie Howarth and guitarist Kasper Sandstrom. Beads of sweat rapidly pooling in their expertly coiffed moustaches, Bailey silently pushes his way through the crowd and takes his place centre stage, casually unawares of the potential catastrophe they might have faced had they been forced to proceed without him.

Adopting a peculiarly restless physicality that relaxes as the minutes pass, at first he appears cautiously old before his time, hunched over and clinging to the mic stand. Spitting out the smothering torrent of bon mots and rapid fire cultural examinations that make up the art rock novella that is recent single Glueland, he teeters horizontal, peering inquisitively at Sandstrom’s flame red guitar in a distracted state of awe and perplexity, the sonic revelations working to straighten his once hobbled spine and as his numerous frustrations simmer up and outward, he climbs on the monitors and teeters forward towards the crowd, coming close to diving into the dark ahead of him.

Pitched somewhere between Frank Sinatra’s drawling croon and Julian Casablancas’ snotty posturing, what keeps him back are the devious tensions created by Sandstrom’s confident finger work and Harrisons’s erratic shuffling. Occasionally flinging himself into incredulous spasms of reverberation by the nimbly discordant riffs he’s making, the distinctly Nordic rhythm guitarist and the timid percussionist act as a solidly calming ocean compared to Bailey’s extroverted exhalations. Howarth, in comparison, is the enigmatic glue that binds the quartet together, a melodic powerhouse lurking beneath the lyrical grotesquery and aural quicksilver, camouflaged behind his outgoing bandmates but providing the foundation upon which they all appear to spikily meander around.

“It’s quiet in here,” Bailey cheekily posits after one particularly caustic track comes to its abrupt end, unaware that it takes us a minute or two to fully comprehend and process the barbaric stream of conscious rambling and profoundly damning rhythmic infractions that we’ve just been subjected to, a moment just to take a collective breath. Thankfully with Do Nothing around, none of us will ever be subjected to the horrors of an awkward silence again.

Do Nothing MP3s or CDs

Do Nothing on Spotify

More on Do Nothing
Do Nothing @ The Hope & Ruin, Brighton