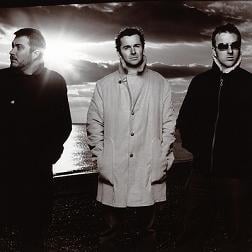 In one corner of London tonight an ambitious young group pummels out its take on Manchester past. In another, a trio of 30-something Mancunians outline their vision of the future.

But, while Kasabian, playing Brixton Academy, rely oh so heavily on their idols Happy Mondays there is no mistaking the sound of the Doves, who’d been there and done that as early nineties dance outfit Sub Sub. And, incredibly, survived to tell the tale while the Leicester boys were still in short pants.

They are simply, and unmistakeably, the Doves. If the halcyon, hedonistic days of Madchester were the party ne’er to be missed Doves are the come-down hours after: an eery, subverted and introspective drift back to sobriety.

Tonight is one of three pre-Christmas dates before they head out on tour proper in the New Year and the release of third album Some Cities in February.

They amble purposely on to stage with none of the cocksure posturing of many a contemporary and pick up their instruments: an expectant crowd awaits. Business as usual. They launch straight in to rumoured future single Snowden, a soaring epic with all of the band’s trademark spiralling melodies, refrains and pounding fragility.

It’s a new song being showcased for one of the first times but still brings a sense of ‘knowing’ to the crowd, who nod along appreciatively.

There are signs here, and later with Black And White Town and Ambition – immediate hits – that the new album could be their best yet. And it seems with each new release they’re growing yet jauntier and cheerier.

But then they’ve never been as miserable or maudlin as their reputation would suggest. Instead their songs are at once both melancholic and soaring, a sense cautious optimism about life and love, loneliness and longing, an embryonic escape from the banality of small-town living.

Words, their second song of the evening brings forth a roar of recognition from the audience, while with the third song comes the video projections we’ve come to love and expect from their live performances. Track New York is fittingly accompanied by images of the city, shot with barely a soul in sight.

Meanwhile, coloured spotlights rain down on the trio, all clad in black. The splintered lights shroud them, lending an air of the ethereal to their stage presence and echoing the fragmented other-worldly quality of the music that pounds out relentlessly.

This is a band that commands its audience live; it’s music a soundtrack to your subconscious. We stand captivated, barely moving a muscle, until the rampaging and incessant hits come forth – among them Pounding, the effervescently lilting Sea Song, Lost Souls’ favourite Cedar Room and closer There Goes the Fear. Arms wave appreciatively aloft during The Last Broadcast; the Palais a sea of limbs from the dancefloor to the packed stairs and rafters, no floor uncovered.

Bassist Jimi Goodwin takes the lead on almost all songs, his seductive gravely voice searing over crescendos of melody and waves of pummelling drums and chords, with that unmistakeable lo-fi ‘fuzz’ of the Doves ever-present underneath.

In an age where pretty-boy youngsters rake over old favourites incessantly it’s reassuring to know that three down-to-earth men from Manchester, with age and experience behind them, can make this music.