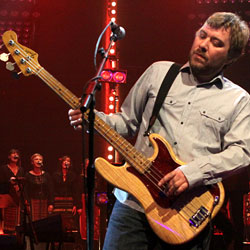 It could not have been planned better. As the country fretted over the rights or wrongs of an appearance by the highest-profile right wing politician since Oswald Mosley on BBC1, a hardy band of BBC 6Music listeners were tuning in to a concert that joyously extolled the virtues of tolerance, immigration and multiculturalism.

Doves’ gig at the Roundhouse, part of the BBC’s short-lived, but increasingly influential Electric Proms series, was backed by the 20-strong London Bulgarian Choir. Their dramatic and sometimes otherworldly Gregorian chants lifted much of the Mancunians’ sometimes plodding output, although even their presence couldn’t save a few of the newer tracks from dragging.

Doves’ star had been in the ascendant since the release of the critically-acclaimed Kingdom Of Rust, and there had been whispers of the band breaking cover and ‘doing an Elbow‘ – surely a disservice to a group who have already had two Number 1 records. In the end, no Mercury nomination was forthcoming, but a string of packed shows and well-received singles have given them fresh confidence, and Jimi Goodwin and co were on fine form, seemingly relishing their turn in the spotlight and humbly acknowledging the added bonus of the Bulgarian Choir behind them.

Appearing in traditional dress (a kind of lederhosen/ kilt hybrid), the group’s all too brief appearances were among the finest examples of the BBC’s attempts to pair established acts with unusual backing (see last year’s The Streets/BBCCO or Oasis with The Crouch End Choir). Their specially-reworked version of instrumental Firesuite was a wonder to behold – a joyful, cacophonous noise that seemed to shake the Roundhouse’s very girders. Less bombastic, but certainly as affecting was their haunting “la la las” on the tremulous Last Broadcast.

Perhaps it says something about the band that their older songs – in particular the epic Cedar Room or the rarely-performed Catch The Sun (played only, according to Jimi Godwin, because the choir “forced us to”) are the ones that lend themselves best to off-kilter operatics. While newer tracks like Winter Hill, The Storm and Jetstream were fine enough, Doves didn’t try their hand at changing the songs to suit the choir, meaning that half the stage was too often taken up with a group of slightly awkward looking Bulgarians- a sad state of affairs for all concerned.

Goodwin’s men have developed – fairly or not – a reputation for delivering plodding meat and potatoes rock. While not in the Stereophonics mould yet, there are a couple of lulls (particularly The Greatest Denier and 10.03) that with a little more imagination both with their setlist and with the choir could have sent the concert stratospheric. The exclusion of The Last Broadcast’s gospel-tinged Satellites is a real misstep, and once the Bulgarian choir have demonstrated their awe-inspiringly powerful vocal range in a couple of solo folk songs (“This one is about falling for someone from another village” explains the choir leader, charmingly) the concert felt a little short on the soar.

Nonetheless, Doves still have a huge canon of hits to fall back on, and fan favourites Pounding, Black and White Town and a final, samba style The Fear sent the crowd home happy. The gig ended on a spine-tingling moment – the band standing by the side of the stage, looking up at the choir as they delivered a final folk lament. “No curfew!” screams Jimi Goodwin – and, at that moment, it was hard to argue with him.