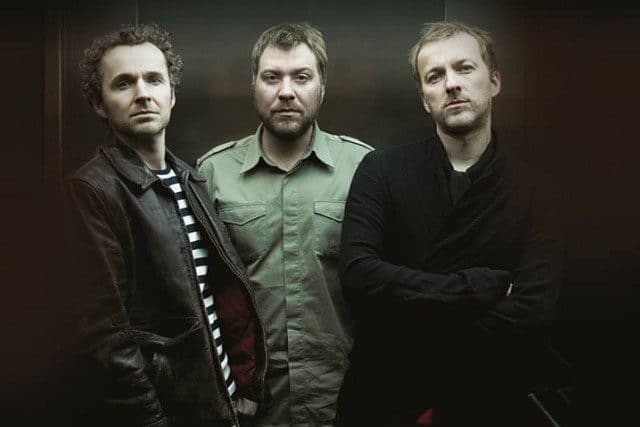 The return of Manchester trio Doves this year after an extended spell away may not have coincided with any new material but it has shown that they still inspire devotion and continue to be held in high regard, feelings very much reinforced by tonight’s show at Somerset House. Taking to the stage they seem in relaxed and buoyant mood, frontman Jimi Godwin offering compliments about the capital and asking the crowd who was here last time they played the venue back in 2003.

Across their four albums Doves provided a suitably cathartic, soothing soundtrack to the post-millennium years and it’s tangible in the early stages. They open with Firesuite from their debut Lost Souls, still a supremely atmospheric, spacious scene setter. Not long later they play the similarly disposed Rise which reaches out to the heaven, all hazy, refracted beauty. Both offer a reminder that much of their early material was about feel, texture and disguised aesthetic.

In between comes Snowden, which shows how they can cloak a song in a downcast mood lyrically, yet simultaneously drag the listener upwards via its vertiginous musical peaks. Black And White Town offers more in the way of appealing paradoxes. Godwin sings of how he’s “gotta get out of this satellite town” where “there’s no colour or sound” yet musically it’s an endorphin-releasing, upbeat adrenaline boost of an anthem that connects magnificently tonight. Sea Song follows and is still one of their most sublime moments. Getting lost within its layers remains a heady, escapist thrill.

The mid-section of the show sees them explore some lesser frequented areas of their back catalogue, specifically their fourth album Kingdom Of Rust. The Outsiders delivers a shot of energy, Winter Hill has a sharpness and definition and Words is more animated and enlivened than on record. Kingdom Of Rust speeds along gracefully, Godwin’s line of “it takes an ocean of trust in the kingdom of rust” showing how they’ve always had a widescreen outlook and always aimed big. It encapsulates many of their key themes; exposed feelings, emotional honesty, building bridges. The fervour in the call to action found in Pounding meanwhile shows how, in their world, hope will always beat adversity. Next, 10:03 is amplified strikingly and Caught By The River is an uplifting finale.

They return for an encore that begins with The Cedar Room, Godwin urging the crowd to “sing your hearts out”. It’s still the emotional epicentre of their music, their deeply affecting calling card. There Goes The Fear follows and they even fit in a cover of Space Face by their previous incarnation Sub Sub. Tonight showed they’re still hugely relevant, their majesty undimmed. Hopefully the next year will see new material emerge to refresh and further extend their legacy.