by Neil Dowden
published: 6 May 2010 in Live Music Reviews
Tweet 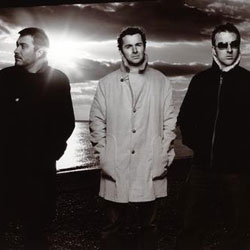 With their cultured brand of anthemic indie rock, Doves have enjoyed a steady if unspectacular musical career that’s lasted for 12 years already. In their current tour promoting last month’s best-of compilation The Places Between, the Mancunian trio celebrate an impressive back catalogue with songs from all four of their studio albums.

Appropriately enough, they kick off their 90-minute gig at the Troxy with the instrumental reverb soundscape Firesuite, the opening track from their debut 2000 album Lost Souls. This is intriguingly followed by the pulsating B side Push Me, but as expected the set list is largely made up of Doves’ better-known songs, including almost all of their singles.

Old favourites such as the sweetly melodic The Man Who Told Everything, the rousingly uplifting Pounding and the echoing epic Snowden, plus the atmospheric Jetstream and catchy title track from last year’s successful album Kingdom Of Rust, all go down well with the crowd without really setting the place alight.

It’s good to hear the two new songs played from the compilation album, Spanish-guitar-tinged Andalucia and rhythmically propelled Blue Water. But it is the upbeat Motown-influenced Black And White Town which gets people dancing in the encores, with the rarely played early song Catch The Sun rapturously received and biggest hit There Goes The Fear, with all three of the band on percussion, as usual ending the gig with a bang.

Doves are not known for being the most dynamic of live acts but singer/bassist Jimi Goodwin, guitarist Jez Williams and drummer Andy Williams (plus unofficial fourth member Martin Rebelski on keyboards) put on a polished if slightly pedestrian show. The band’s complex, layered production on their records is tricky to reproduce in concert, and early on the drumming sounds a bit out of sync and too strong in the mix, but they get it together later.

Goodwin makes a half-hearted satirical comment on David Cameron’s election campaign – a little time after polling booths had closed on Thursday night – but for the most part the band let the music do the talking. Video images on a large screen accompany some of the songs, though the one that makes the most impact simply says ‘Save BBC 6music’.

The audience in the civilized but rather corporate Troxy surroundings may be a bit slow to warm up but once they do they show their full appreciation of the sophisticated sound that Doves have honed over the last decade.