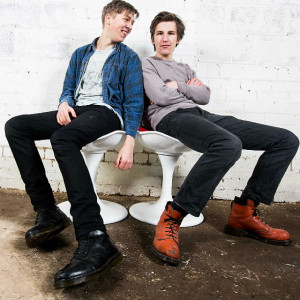 East Village Arts Club has come a long way since opening earlier this year. Housed in the same building as the old Liverpool Barfly, it’s now a rather polished looking venue far away from the griminess of old, and it’s set to host the likes of John Grant and Yo La Tengo over the coming months.

Tonight’s offerings are far from polished, though. There’s no Tom Watson here to see the brothers Loveless, although by the looks of things, Drenge fans aren’t far off Watson’s age. There’s a few punks as well, no doubt to keen to see support band Radkey who, like the headliners, recently appeared on Later… with Jools Holland and, also like the headliners, are fast becoming feted themselves.

Hailing from Missouri, the three Radke brothers range from 15-19. The youngest, drummer Solomon, is wearing an X-Men t-shirt and looks every much like your typical mid-teen. The oldest, guitarist and vocalist Dee, has face covering dreadlocks and a t-shirt with “Afro Punk” on the front. Then there’s the middle brother and lead member, bass player Isaiah, who looks like a cross between Jimi Hendrix and Herbie Hancock from his Future Shock/Rockit days.

“We’re Radkey and that’s what the fuck is up” he says before they launch into set opener Out Here In My Head, which has all the aggression and power of a Black Flag track. Cat & Mouse soon follows – a song about murder, which is “fun to write about” according to the middle brother. By the end, Isaiah launches himself into the crowd, delighting everyone in the process. A raw, hardcore, punk delight.

The Loveless brothers don’t hang about. They’re meant to be on at 10pm, but screw that: they’re on 15 minutes early, with people running back into the hall after a cigarette or fresh air. There’s a purity that runs throughout Drenge’s body of work; one honed in 1950s rock and roll, through to garage rock and lo-fi indie. Backwaters is taken up notches compared to the album version, with drummer Rory the dominant and precise force behind it. Gun Crazy is delivered passionately and intensely, with hints of Jerry Lee Lewis via older brother Eoin.

Fuckabout acts as a pleasant contrast to the heavier end of things, with Eoin’s vocal taking on a hint of tenderness and vulnerability as he sings about some mysterious girl, confusion and general disillusionment with life itself. “I don’t give a fuck about people in love, they don’t piss me off but just make me give up.”

And yet despite this, Drenge are almost too efficient, rifling through these songs at a rapid, ruthless – dare one say it, loveless – speed. In one sense it’s much applauded: they cut through the nonsense, get right to it and get the job done. Many seem to appreciate that. It’s appropriate as well, since these aren’t songs to be ‘enjoyed’ per se. But it also feels like they want this over as quickly as possible. A fine line.

But – contrary boys that they are – set closer Let’s Pretend is eight minutes of fervid, impassioned playing from both, before Face Like A Skull sees Eoin throwing himself and his guitar to the floor, with feedback galore. It’s all done in half an hour, with some in the audience looking a little miffed. It’s all too brief, but unsurprising; the album is hardly long.

But when Radkey did so much to win you over, you feel a little short-changed. The Radkes won the battle of the brothers tonight.