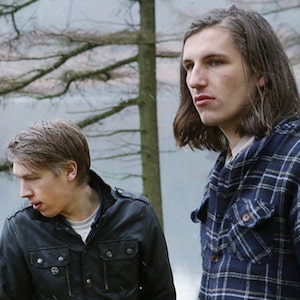 If whilst awaiting the appearance of a band on stage the crowd start singing along to the track playing on the PA with kind of gusto normally reserved for encores or, at the very least, hit singles, you know it’s going to be one of those kind of shows.

That kind of show. So when Drenge actually then appear and then start playing an actual song (Running Wild, from latest album Undertow) the excitement reaches a level where people are chanting along to a bit from one of the guitar lines. Not just the lyrics, not even a main riff – this isn’t a Seven Nation Army like, easily and obviously reproducible – it’s just a few notes at one of the sections.

Yes, crowd at show likes band performing at show may be on the level of Dog Bites Man as far as no-shit-Sherlock headlines go, but there’s just something about the sheer level of rabidity in the response Drenge receive that is worthy of note. It makes it easy to see them doing this on a bigger stage for a larger crowd without anything much in the way of alterations.

Which in truth may be a slightly backhanded compliment. There’s more subtlety in Drenge than beery, cheery, screaming circle-pits might suggest. But it’s also true that the slower moments, particularly the portentous, foreboding Standing In The Cold, do equate with the bits where people seem least engaged. Which is a shame, as those are often swirling, malevolent and downright interesting.

Although, it’s hard to argue with the visceral barrages that come elsewhere. During Gun Crazy it’s pitched somewhere between Motörhead and a much rawer, much grimier, much heavier Royal Blood. I Will Break You In Half is delivered as a vicious roar, and the rolling drums and punky, spiteful bounce of We Can Do What We Want is sneeringly sure of itself.

But best of all, there is a sense of bloody-mindedness about Drenge. It suggests, happily, they will continue to do things their own way rather than tracking anyone else’s trends. As the howling epic dirge that is Let’s Pretend brings this evening to a close, that seems like a very smart path to follow.