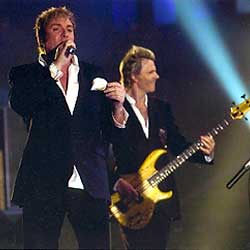 Okay, it’s confession time – I was a massive Duran Duran fan. Rather than hanging my head in shame, though, I will revel in what was, until recently, seen as a musical sin.

I say “recently”, because it only really became “cool” to like Duran Duran again at the tail-end of last year when the original line-up reformed for that gig at London’s Kentish Town Forum. Duran Duran had never gone away, of course, releasing more albums as their “mini” version (minus two and then eventually all three of the Taylors) than when they were a world-ruling, girl-swooning, boat-capsizing quintet prior to 1986.

Put simply, Ali G, as she’s probably not known to her friends, is completely barking. Her choice of stage attire – thigh-length, six-inch heeled boots, gold sequined top, pants that weren’t so much “hot” as blood vessel busting and a long horse’s tail (I kid you not) – drew an audible gasp from the one-third full assembly and left us with the impression that the only thing missing was a whip. And that’s without mentioning the Cruella Di Vil hairdo…

Whatever the oddities of Ms Goldfrapp’s garb, boy the girl can sing or, at the very least, do fantastic Star Trek theme tune impressions, if the opening track was anything to go by. Once the crowd had cottoned onto this fact they gradually warmed to Her Royal Weirdness and so they should have done because Goldfrapp’s brand of cinematic, lascivious trip-hop sounds like no-one else. At least it didn’t until Kylie and Sophie Ellis-Bextor started plagiarising it…

All things considered, Goldfrapp did rather well during their 35-minute set. Lovely Head, with its whistling underbelly of seduction, skipped over any potential landmines related to it being a TV advert tune, while the likes of Twist and Train bumped and ground their way into people’s affections with a cunning mlange of insistent, booming bass lines, all manner of electronic squelches, bloops and burps, and catchy melodies.

And so to our heroes who, with the exception of Andy Taylor (who’s gone for a swept-back-carpet / mini-mullet hairdo and should get his eyes checked if he needs to wear rock star shades inside Wembley Caverna), all look exceptionally good for men born five (count ’em) decades ago.

Simon Le Bon, in particular, is a sprightly piece of mutton, running up and down the stage and its dual walkway set-up for the entirety of the two hour show, working all sections of the crowd, gurning for the hand-held cameras that beamed band images onto big screens, and generally playing his part as the Peter Pan of Pop to perfection. Oh, and singing like you wouldn’t believe, too.

Tonight, classic after classic was reeled out, from early hits like Planet Earth and Girls On Film, through halcyon era tunes like Rio, The Reflex and Is There Something I Should Know, and onto post-split singles like Notorious, Ordinary World and Come Undone.

To their credit, however, the Duran-ies didn’t “just” do a Greatest Hits show. Instead, they interleaved the karaoke numbers with some of their lesser-known hits and live favourites (New Moon On Monday, Careless Memories and the classic Chauffeur), the odd cover (their rockingly funky version of Melle Mel‘s White Lines from 1995’s Thank You album), as well as new, recently-written tracks.

To be frank, the newer tracks didn’t always hit the sweet spot. Opening with Sunrise, a song which is on the soundtrack to a series not on UK terrestrial TV yet – Queer Eye For The Straight Guy – was bewildering, particularly after the grandiose intro where each member of the band stood on the stage, in their own plume of light, while milking the applause.

Similarly, What Happens Tomorrow didn’t come across as anything special, at least not on first listen, and wasn’t helped by a slightly hamfisted attempt at explaining its lyrical motivation: “People think the world’s a bad place. Maybe it is, but if we don’t believe things will get better then they never will.” Hmmm.

Nevertheless, these are minor gripes, even if these ears would have liked to have seen one of the songs or extended jams sacrificed in order to hear Union Of The Snake. The fact is that Duran Duran made us sing, made us shout, made us laugh (Le Bon on returning for the encore: “Did you miss us?” Crowd cheers. “I didn’t mean now – I meant for the last 18 years!”), and generally rocked our world for a couple of hours.

On exiting the venue, we were confronted with posters of Westlife and Busted. When comparing Duran Duran with such musical morons, never has the phrase “men against boys” been more appropriate…