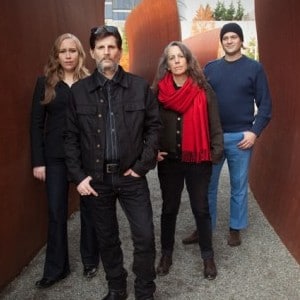 Earth mainman Dylan Carlson wields his Telecaster like a sorcerer, conducting and directing the almost incomprehensibly heavy sounds emanating from the stage at Union Chapel. The notion of Earth playing such a sacred venue provides an incongruency based on Carlson’s reported fondness for the rites of paganism and medieval occultists. And it is this clash of beliefs which provide the framework for a wonderfully intense evening, composed of guitar notes which seem to linger toward infinity, trap drumming serving as caesuric punctuation and more bottom end than the San Andreas Fault Line.

Returning to London to promote Angels of Darkness, Demons Of Light II, Carlson has maintained a relatively steady line up since the band’s return in 2005. Augmented by Adrienne Davies on percussion, Karl Blau on bass and Lori Goldston, who famously accompanied Nirvana on their MTV Unplugged session, anchoring the band with her cello flourishes. Despite being around since the late 1980s, Earth have had a rather tumultuous existence with Carlson the sole mainstay; his penchant for heroin and shotguns may seem him forever associated with friend Kurt Cobain but it was this crippling drug addiction which saw Earth take a five year hiatus at the beginning of this decade. The onset of liver failure didn’t assist the band’s trajectory but it is a clean Carlson who has guided the band away from their metal origins to a more measured, albeit no-less-amplified, folk aesthetic, influenced by the likes of Fairport Convention and Comus.

If Carlson has given up the drugs, his music certainly hasn’t. With a set primarily comprised of material from the most recent two albums, the band carved out an intensely narcoleptic set, immersed in repetitive chord structures, an utterly monochromatic psychedelia. This muscular approach was echoed when the band dipped into the not-too-distant-past to play the title track from The Bees Made Honey In Lion’s Skull – a reference to the story of Samson in the Bible – and an entirely reworked version of Tallahassee from 1996’s Pentastar: In The Style of Demons.

Indeed, the latter provided a few surprising whoops of recognition from an audience that was entirely rapt and reverential throughout. Carlson and co. never really strayed from their template; however, two new tracks were aired – Badger and Blackwaterside, an interpretation of the folk standard by Bert Jansch and Anne Briggs – with the latter a sustained exercise in spellbinding restraint, and perhaps a nod to the solo album comprised entirely of British folk tunes which Carlson is presently threatening to record.

Mention must also be made of Ô Paon, whose beautiful, meditative tunes (almost hymn-like in the setting) were at least a match for Earth’s heaviness. Ô Paon – aka Geneviève Castrée aka Woelv – falteringly apologised for her broken English and sung in French Canadian, assisted by guitar and loops pedal but the linguistic differences nary mattered; her impressive set ticked all the spectral/folk boxes but was carried off into an entirely more bewitching realm through Castrée’s beguiling delivery, her gentle approach shrouding a heart of darkness at the epicentre of her set.